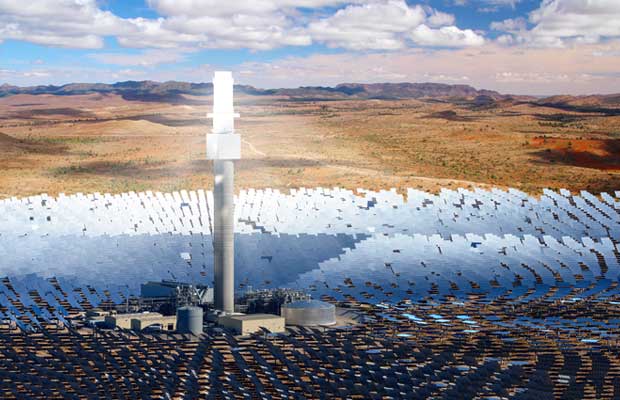 SolarReserve has signed a long-term Generation Project Agreement (GPA) to build a 150 megawatt solar thermal power station with 8 hours of energy storage near the town of Port Augusta, South Australia. The GPA with the State Government of South Australia was signed at a ceremony with Jay Weatherill, Premier of South Australia, and Energy Minister Tom Koutsantonis.

“The Port Augusta story is a stark example of the transition of the South Australian economy, with the closure of a dirty coal fired power station, and now the commissioning of this world leading renewable energy project,” said South Australia’s Premier Jay Weatherill.

Providing Power When It’s Needed Most

The first of its kind in Australia, the Aurora Solar Energy Project will utilize SolarReserve’s leading solar thermal technology with integrated molten salt energy storage. With a massive 1,100 megawatt-hours of energy storage capability, Aurora will be the largest project of its kind in the world, designed to meet the South Australian Government’s annual electricity consumption.

The Generation Project Agreement is similar to a Power Purchase Agreement for renewable energy, except that emphasis is placed on the available capacity of the facility during peak demand periods rather than just the energy that can be delivered in kilowatt-hours. Aurora will deliver power into the National Electricity Market (NEM) at high value electricity periods, providing additional capacity, energy security and reliability services, as well as competition into the South Australian market.

“SolarReserve’s energy storage technology is an excellent fit for the South Australian electricity system,” said SolarReserve’s CEO Kevin Smith. “Aurora will provide much needed capacity and firm energy delivery into the South Australian market to reduce price volatility. SolarReserve looks forward to continuing to work with the South Australian government and stakeholders, including the Port Augusta community where the project is located, to support Federal and State renewable energy targets, stimulate long-term economic development, and create new jobs and businesses.”

Because a solar thermal power station operates like a conventional coal or gas power station, many of the jobs require the same skill sets as conventional energy jobs – from its construction phase through to operations. Aurora is an example of how sustainable solutions are able to foster new industries and create new jobs for South Australia:

As part of this transformative project, SolarReserve will be establishing a research partnership with South Australian universities to advance solar thermal research and education in South Australia.

“The Aurora project brings the most advanced power generation technology to South Australia, supporting its energy security and carbon reduction objectives,” said Tom Georgis, SolarReserve’s Senior Vice President of Development for SolarReserve. “It also represents a significant opportunity for South Australian workers and businesses to participate in this exciting project.”