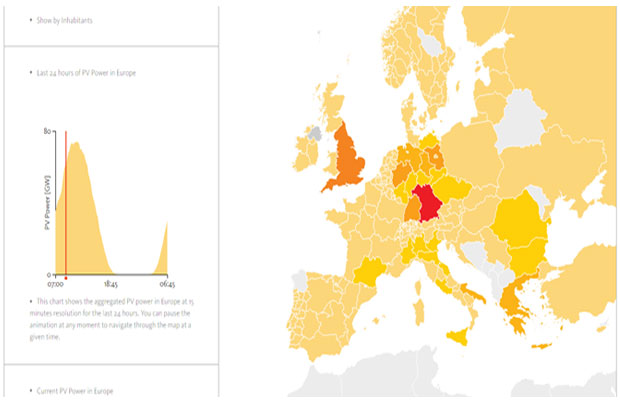 “SMA is offering a global data network of more than 250,000 PV systems worldwide and we take great pride in being part of this important project. The SolarPower Live Map shows how viable and reliable solar is today”

SolarPower Europe has announced the launch of SolarPower Live Map for close to real-time mapping of solar power generation in Europe. The company is touting it as the most dynamic and accurate tool.

James Watson, CEO SolarPower Europe, said ‘The SolarPower Live Map provides close to real time solar generation data and covers virtually all European countries, with some data broken down further on a detailed regional level. There is also the option to see the historic solar generation from 2005 to 2016, as well as generation data per inhabitant. This is an unprecedented tool in the renewable energy sector and demonstrates the perfect synergy between solar power and the digitalisation of energy.’

‘We made this tool using 3E’s excellent solar data service to show that hour-by-hour solar is driving the energy transition in Europe“, said Thomas Döring, SolarPower Europe Policy Analyst and coordinator of the map. Döring continued, “We hope that policy makers, industry and the public enjoy exploring solar across regions, cities and countries -and see the vast potential of solar in Europe‘.

The map was made in collaboration with the leading solar experts of 3E and SMA. Geert Palmers, CEO of 3E stated ‘Solar brings major power contributions to our society – to rural communities and to our cities, smartly integrated from Pico to Gigawatt scale. In several regions of Europe, we reached over 30% coverage of the power consumption by solar over sunny hours during the day. 3E is proud to power this great initiative with our solar data services‘.

‘SMA is offering a global data network of more than 250,000 PV systems worldwide and we take great pride in being part of this important project. The SolarPower Live Map shows how viable and reliable solar is today, thus policy-makers across Europe should increase the deployment of the clean energy source that is solar’, said Detlef Beister, Business Development Manager for Product Group Solutions at SMA.