Solar the Star For Attracting Investments in India’s Energy Sector

Rising population, an emerging economy with exponential growth ambitions, and urbanization are some factors contributing to India’s increasing energy demand. According to a report by the International Energy Agency (IEA), India will be the main driver of rising demand for energy over the next two decades, accounting for 25 per cent of global growth. The country is set to overtake the European Union as the world’s third-biggest energy consumer by 2030 source.

While, in order to meet this pertinent demand, India remains dependent on a volatile global fossil fuel market, the need to develop a stable homegrown ecosystem for renewable energy is felt more than ever. Not only for existing energy needs, but also to ensure the decarbonisation of sectors like transportation and others with green energy. Among various forms of renewable energy, solar has shown sustained growth and the most promising future. Given the country’s geographical terrain and proximity to the tropic of cancer, solar power can be produced more efficiently and almost around the year.

The share of solar power in India’s installed power capacity mix reached 10.3%, exceeding that of wind-based power sources for the first time in 2021. In other words, the rise has been about 11 times between 2014-19. Moreover, the projection also suggests that solar energy will witness exponential growth and match coal’s share in the Indian power generation mix by 2040 or earlier. As it happens, the share of coal is expected to decline from 44% in 2019 to 34% in 2040.

Considering the massive opportunity, there has been a robust FDI inflow in India’s non-conventional energy sector. According to the data released by the Department for Promotion of Industry and Internal Trade (DPIIT), this investment stands at over US$ 42 billion since 2014 (source). The biggest catalyst for this investment is the Government’s impetus on developing clean energy sources through various large-scale sustainable power projects. The Ministry of New and Renewable Energy (MNRE) has set an ambitious target to set up renewable energy capacities to the tune of 225 GW by 2022, of which about 114 GW is planned for solar. This will be done through various models including public-private partnership. Moreover, the Government has also extended the production led incentives (PLI) scheme in Solar PV manufacturing with financial outlays of Rs 4,500 crores under Atma Nirbhar Bharat 3.0. This is an important move towards enhancing India’s manufacturing capabilities and exports, especially at a time when the country is aiming to bridge the gap in balance of payments, with the rest of the world. All these policy measures have made solar power an attractive investment avenue for foreign director investors. 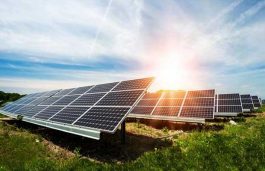 Apart from bridging the energy deficit, developing solar power infrastructure also has the potential to create many employment opportunities at all levels, especially in rural areas. Thus, it also aligns well with the Government’s agenda of inclusive growth. Last but not the least, boosting the solar power production augurs well with India’s commitment to the Paris Climate Accord that aims to substantially reduce the risks and impacts of climate change on the world. With the increasing focus of investors on Environmental, Social, and Corporate Governance (ESG) oriented business, the sector has all the boxes ticked to draw a major chunk of FDI in the country.

The author is CEO and Founder, FDI India, a consultancy For Indian Businesses To Build a Global Outreach.