The entire patented process for the Solar-Tectic LLC III-V tandem cell can be environmentally friendly since non-toxic metals can be used to deposit the crystalline thin-film materials for both the bottom layer in the tandem configuration as well as in the top, III-V, layer. 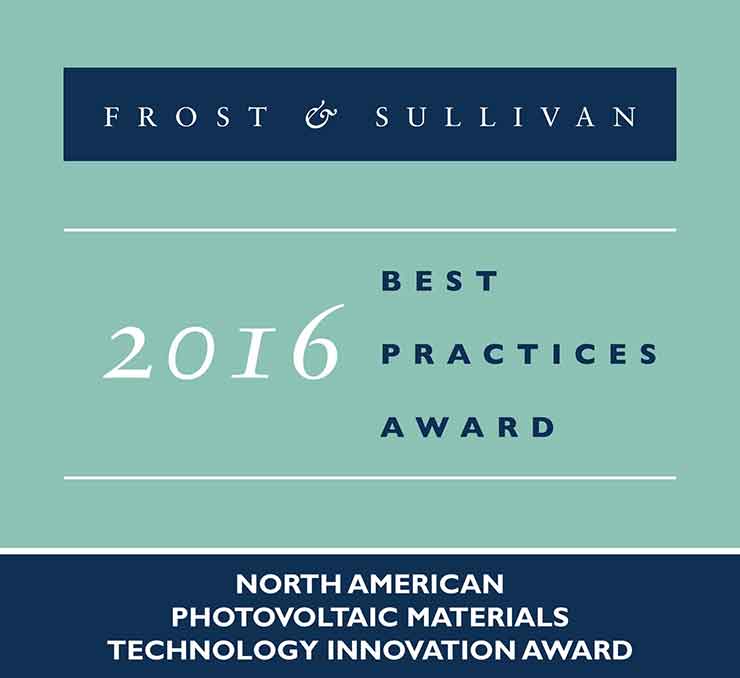 Solar-Tectichas announced that a patent application for a method of making III-V thin-film tandem solar cells with high performance has been allowed by the US Patent and Trademark Office. The patent, the first ever for a thin III-V layer on crystalline silicon thin-film, covers group III-V elements such as Gallium Arsenide (GaAs), and Indium Gallium Phosphide (InGaP), for the top layer, as well as all inorganic materials, including, silicon, germanium, etc., for the bottom layer. Group III-V compounds such as Gallium Arsenide (GaAs) are proven photovoltaic materials with high efficiencies but until now have been cost prohibitive because high quality III-V material such as GaAs is expensive. Moreover, the cost of substrates on which to grow III-V materials, such as germanium, which is known to be an ideal material, has kept the technology from market entry. In the breakthrough technology here, ultra-thin films of III-V materials and silicon (or germanium) replace expensive, thicker wafers thereby lowering the costs dramatically. The inventor is Ashok Chaudhari, CEO of Solar-Tectic LLC.

III-V tandem (or multi-junction) cells built on wafers such as silicon are currently being developed in labs, with high efficiencies of around ~30%.  The highest dual-junction cell efficiency (32.8%) came from a tandem cell that stacked a layer of gallium arsenide (GaAs) atop crystalline silicon. Manufacturing costs are expensive especially if a germanium wafer is used as the bottom material in the two layer tandem structure.  In order to compete with low cost silicon wafer technology which is 90% of the global solar panel market, efficiencies must not only be as high as silicon wafers or greater (21.7% and 26.7% are lab records for poly- and monocrystalline silicon wafer cells, respectively), but manufacturing costs must also be lower. This is achievable in the Solar-Tectic LLC patented technology, which uses common industrial manufacturing processes and at low temperature. There is no wafer involved which saves material and energy; instead a thin film allows for precise control of growth parameters. A glass substrate instead of wafer also allows for a bifacial cell design for increased efficiency. A cost effective ~30% efficient III-V tandem solar cell in today’s market would revolutionize the solar energy industry by dramatically reducing the balance of system (BoS) costs, and thereby reduce the need for fossil fuel generated electricity. Silicon wafer technology based on polycrystalline or monocrystalline silicon could become obsolete.

Importantly, the entire patented process for the Solar-Tectic LLC III-V tandem cell can be environmentally friendly since non-toxic metals can be used to deposit the crystalline thin-film materials for both the bottom layer in the tandem configuration as well as in the top, III-V, layer.

A “Tandem Series” of solar cell technologies has been launched by Solar-Tectic LLC, which includes a variety of different proven semiconductor photovoltaic materials for the top layer on silicon and/or germanium bottom layers. Recently patents for a tin perovskite and germanium perovskite thin-film tandem solar cell were also granted.

The ITC ruling on September 22 means that it is likely that tariffs will be imposed on crystalline silicon wafers sold in the US. These tariffs will not apply to thin-film solar cell technology, such as ST’s.