Despite slower growth in key renewable energy markets including China, jobs in renewables grew to their highest level on the back of many more countries adopted manufacturing, trading and installation of renewable energy technologies. 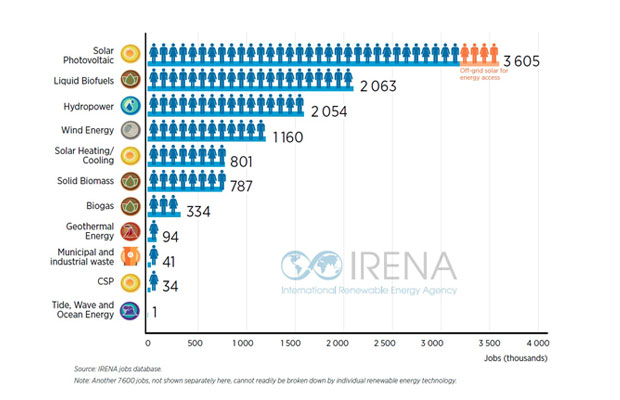 The employment in solar photovoltaic (PV) industry witnessed a surge in India, Southeast Asia and Brazil in 2018, whereas major markets like China, the United States (US), Japan and the European Union (EU) saw a slump in the same year, said the International Renewable Energy Agency (IRENA) in its analysis.

The analysis of Abu Dhabi-headquartered IRENA showed that, despite slower growth in key renewable energy markets including China, jobs in renewables grew to their highest level on the back of many more countries adopted manufacturing, trading and installation of renewable energy technologies.

According to the latest IRENA report ‘Renewable Energy and Jobs – Annual Review’, the solar industry is still holding the top spot, with one-third of the total renewable energy workforce, and geographically, Asia hosts over 3 million solar jobs, nearly nine-tenths of the global total.

Globally in 2018, 11 million people were employed in the renewable energy industry, as compared to 10.3 million people in the previous year, said the report.

Speaking on the report, IRENA, Director-General, Francesco La Camera said, “Beyond climate goals, governments are prioritising renewables as a driver of low-carbon economic growth in recognition of the numerous employment opportunities created by the transition to renewables.”

Moreover, the geographic footprint of the renewable energy sector is changing after the diversification of the sector’s supply chain, the report added.

For a long time, industries in renewable energy have remained relatively concentrated in a handful of major markets. However, increasingly, countries from East and Southeast Asia have emerged, alongside China, as key exporters of solar panels.

Last Year, countries including Malaysia, Thailand and Viet Nam contributed to a greater share of growth in renewables jobs. This allowed Asia to maintain a 60 per cent share of renewable energy jobs globally.