In a new report, the Institute for Energy Economics and Financial Analysis (IEEFA) says that solar pumps help to expand distributed solar generation while catering to agriculture’s vast power demand. And in India, Solar-powered irrigation can help achieve its Energy Transition as the country is already lagging far behind its near-term target of 40GW of rooftop solar capacity by 2022. This is an important sub-target of the 100GW of solar capacity which is in turn part of the target to install 175GW of renewable energy capacity by 2022.

The report entitled, “Solar-Powered Irrigation Would Accelerate India’s Energy Transition” shows that India’s agricultural sector accounts for about 20 percent of electricity consumption as per data from the fiscal year 2018-19. Most of the electricity demand falls under irrigation. However, only 48 percent of the country’s “net sown area” is irrigated while the rest is dependent on the vagaries of nature. And as per Ministry of Statistics and Programme Implementation (MoSPI) data from FY 2017-18, 62 percent of the country’s net irrigation was done either by relatively deep tube wells or other, shallower types of wells. In short, ground water (GW). Most of these wells are reliant on electric or diesel pumps.

Which should direct the country’s mindsets towards solar-powered irrigation rather than conventional irrigation techniques. “Solar irrigation pumps when implemented sustainably are a key instrument to tackle the growing challenges of the nexus between food, water, and energy in India,” says IEEFA.

Sale of Electricity in Futures Market will Benefit RE Investors: IEEFA
Also Read

The report reviewed the progress of the (Ministry of New and Renewable Energy) MNRE’s PM-KUSUM scheme which has a target of deploying a total of 30.8GW of capacity through various modes of solar irrigation pump systems by 2022 with a total central financial assistance budget of Rs. 34,422 crores.

Despite having such ambitious goals under Component A, B, and C of the PM-KUSUM Scheme of the government of India, IEEFA reported an extremely slow process of applications of the scheme under these three components.

The author of the report, Kashish Shah reports that according to the MNRE data, against the ambitious target of 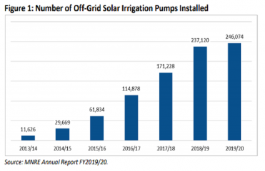 installing two million (20 Lakh) off-grid solar pumps, only 246,000 pumps approximately, were installed by the end of FY 2019-20. “The PM-KUSUM scheme should have accelerated the process of pump deployment, however, we note only 8,900 pumps were deployed in the 12 months after the formalization of the scheme,” said Kashish Shah.

The report cited some key reasons which might be slowing the process of solar-powered irrigation including, lack of coordination between state bodies and mismanagement of subsidies, unaffordability for farmers, asset ownership, and technology. Shortage of domestic modules has also come up in recent times as cause.

The report highlights how MNRE opted for bulk sourcing of solar irrigation pumps to bring the costs down as well as provide the necessary momentum for uptake of pumps. In January 2021, Energy Efficiency Services Limited (EESL), a government-owned entity, issued a tender to source approximately 318,000 off-grid solar irrigation pumps in selected states under component-B of the PM-KUSUM scheme, says the report.

This tender mandated the usage of indigenously manufactured modules to promote the ‘Make in India’ program of boosting local manufacturing and decrease dependency on other countries.

the report concluded its view by sharing the experience and progress of solar pump deployment in various states including, Gujarat, Maharashtra, and Andhra Pradesh.

“There is also a substantial opportunity to build Indian manufacturing of solar irrigation pumps to cater to local and international demand (in markets such as Bangladesh and Africa), which would help further the government’s aim of a ‘self-reliant’ India and drive a greener economic recovery,” the report said.