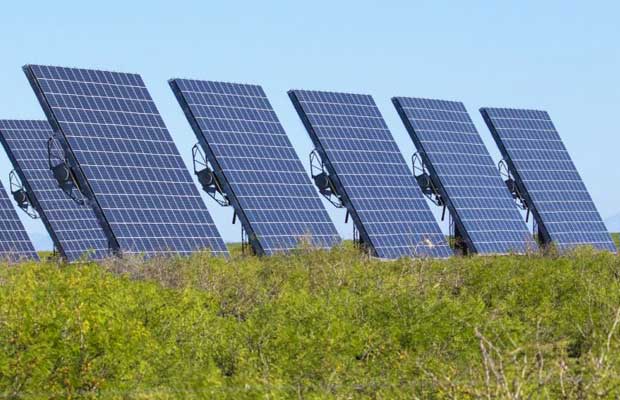 According to a list of 1,211 items released after the meeting of the GST Council, which comprises finance ministers of all the states of the Union, “Photosensitive semiconductor devices; including solar photovoltaic cells, whether or not assembled in modules or made up into panels”, will be charged at a rate of 18 Goods and Services Tax (GST) regime.

The government’s surprise announcement that solar photovoltaic cells and modules will attract a levy of 18 per cent under the Goods and Services Tax (GST) regime that comes into force on July 1 caught the industry unawares, but experts said it was unlikely to have any lasting impact on the rapid growth of India’s solar energy sector.

The GST regime, which does away with state levies such as excise and value-added taxes, will unify the entire country into a common market. The government has proposed four slabs of taxes under the new system. According to a list of 1,211 items released after the meeting of the GST Council, which comprises finance ministers of all the states of the Union, “Photosensitive semiconductor devices; including solar photovoltaic cells, whether or not assembled in modules or made up into panels”, will be charged at a rate of 18 Goods and Services Tax (GST) regime. The effective rate for solar panels and modules currently stands at zero.

However, the council has proposed that renewable energy devices, which includes waste-to-energy and biogas plants, solar water heaters, solar lanterns and lamps, solar power generating systems and windmills, be charged at the lowest tax slab of per cent. The low five per cent tax on wind turbines is expected to keep project costs low for developers such as Inox Wind and Suzlon Energy, and soothe worries of the wind energy sector. Some battery types and components may get the highest tax of 28 per cent.

The rates are not yet final. The proposals are subject to further vetting and the list may undergo some changes. They will be finalised by the end of June.

The government has strongly defended the high rate of tax for solar panels and modules. “Tariffs for solar projects vary from project to project. The rise (in tax rate) will be compensated by the decline in corruption and operational difficulties,” Energy Minister Piyush Goyal said at a media briefing after the list was made public. “The prices of solar and wind energy have hit a record low and the industry is now able to stand on its own feet.”

But the new rates will hit more than 10 GW of utility scale solar power projects and could pose a threat to their viability, according to Bridge to India. They will result in an increase of 18 per cent in the cost of solar modules, about 12 per cent in inverter cost, and three per cent in all service costs, thus increasing overall project cost by about 12 per cent, the clean energy consultancy said.

“There was widespread expectation that solar modules would be classified under zero or five per cent bracket to continue growth momentum in the sector,” Bridge to India said. “However, sharp reduction in equipment costs and solar tariffs seems to have convinced the government that the sector doesn’t need any more financial incentives.”

India’s solar energy sector is in the middle of unprecedented growth, fed by declining tariffs, improved technology and a global oversupply of photovoltaic panels and other material, mainly in China. “India is on track to install more than 10 GW of renewables per year from 2017 as large-scale renewables, rooftop solar and off-grid sectors show impressive growth,” Bloomberg New Energy Finance said in November.

The increase in tax rates for solar panels is not wholly unexpected. Solar power tariffs, which sank to a record low of Rs 2.94 per KWh for a newly auctioned project in the Thar desert in Rajasthan, could see upward pressure of as much as 10 per cent if tax incentives are squeezed when the GST is introduced. This is as per the prediction of the Council on Energy, Environment and Water (CEEW).

“India’s solar industry can stand its ground with 18 per cent GST rate,” Jasmeet Khurana, Associate Director at Bridge to India, said in a post on microblogging site Twitter.

The pace of solar tenders accelerated sharply after the government announced an ambitious target of adding 100 GW of solar capacity addition by 2022. Currently, the cumulative installed capacity in India is above 12 GW, and the solar sector is expected to add around 10-12 GW of new capacity in 2017.

The wind power sector seems to have shifted into a higher gear as well, aiming to build wind farms and installations to add at least six GW of capacity every year for the next five years. The first-ever wind power auction in February saw a record low tariff of Rs 3.46 per kWh.

“We don’t need support of lower taxes to encourage renewable energy,” Goyal said. “By itself, it is good for the nation. It reduces pollution. It gives discoms 25-year-long affordable power at prices which are even below grid (parity price).”

The cost of grid-connected, coal-fired power plants averages around Rs 2.60 per kWh.

“We believe that the long-term prospects of the (solar) industry would not be impacted by the GST move as an increase in tax rates will be quickly offset by falling costs,” Bridge to India said. “A commercially viable, non-subsidy dependent sector is naturally more sustainable in the long run.”