Solar Installations in India to Reach 4.8 GW in 2016: Mercom Capital 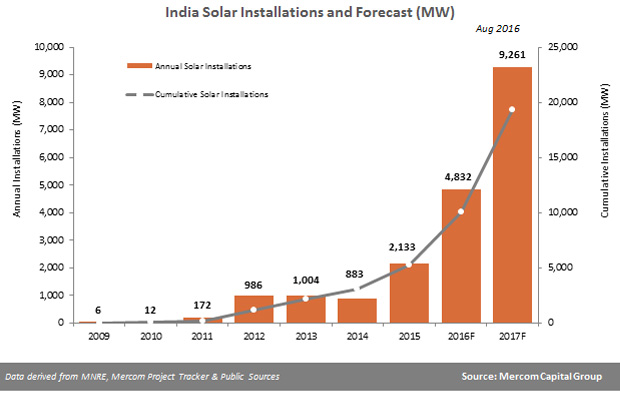 Mercom Capital Group in its quarterly update on the Indian solar market revealed that solar installation in India will reach 4.8GW in calendar year 2016. The solar project pipeline in India is now approximately 21 GW, with 14 GW under development and 7 GW scheduled to be auctioned.

“Solar installations and its share of energy generation has picked up speed but distribution companies continue to be a drag on the sector and are showing reluctance to purchase solar in light of low power demand and cheap power availability on the exchanges,” said Raj Prabhu, CEO and Co-founder of Mercom Capital Group. “This is an alarming development that the central government should address immediately to restore confidence among developers and investors,” he added.

Mercom Capital notes that low bids are still a challenge and projects with bids below Rs.5 (~$0.0746)/kWh have yet to close financing. Although bids stabilized somewhat, they fell again with the lowest reaching Rs.4.35 (~$0.0649)/kWh in the latest JNNSM Phase II Batch 2 auction in Rajasthan.

Chinese modules in India are currently available for ~$0.39 (~Rs.26)/watt which is the cheapest average selling price currently anywhere in the world says the report.  Module prices are forecasted to drop even further in the short-term due to the massive oversupply situation in China.

The global clean energy communications and research firm stated solar panels making up approximately 60 percent of project costs in India; China’s oversupply issue is a big boost for Indian project developers but not so much for Indian manufacturers.

Current incentives have not been enough to move the solar rooftop market forward says the report.

According to a recent MNRE report, the Goods and Services Tax (GST) bill will largely be a negative for the solar sector. However, the details are not yet determined and it is still unclear whether renewable energy will be exempt. Developers expect the ‘change in law’ clause in PPAs to protect them from the negative impact of GST.

“Companies loaded with debt are finding it difficult to grow in this highly competitive environment and we expect to see a lot more M&A activity on the project side,” further commented Prabhu.

Consolidation activity has picked up in the sector, especially in the downstream segment. Welspun’s 1.1 GW project portfolio was acquired by Tata Power earlier this year for $1.4 billion (~Rs.9,380 crore). There are a number of other M&A deals in the pipeline