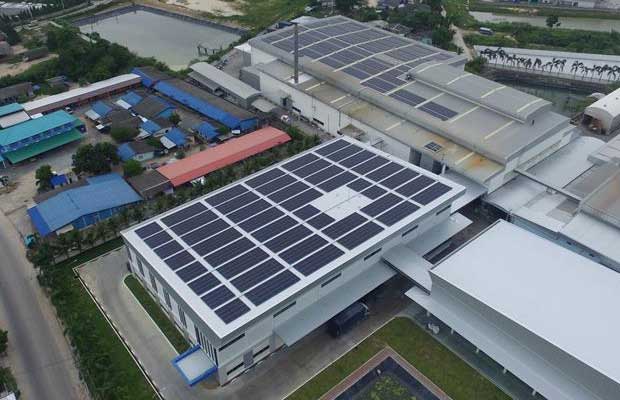 A total of 2,848 pieces of Solar Frontier’s CIS thin-film solar panels – equivalent to 484.16 kW in size – were installed on two factories for the Thai manufacturer of EPS (expanded polystyrene) and EPP (expanded propylene) packing foam

Solar Frontier has announced the installation of its CIS thin-film solar panels at two buildings for Kaosu Packing (Sriracha) Industry Co., Ltd. in Thailand. The solar project was constructed by Energy Pro Corporation Ltd., a Thai solar power EPC specialist that has a long standing relationship with Solar Frontier throughout the region.

A total of 2,848 pieces of Solar Frontier’s CIS thin-film solar panels – equivalent to 484.16 kW in size – were installed on two factories for the Thai manufacturer of EPS (expanded polystyrene) and EPP (expanded propylene) packing foam. Expected annual power generation from the solar plant is of 705,100 kWh. Power generated form the solar power plant will be for self-consumption, leading to an expected level of CO2 reduction of 409 tons over the year.

Masahiko Nakagawa, Managing Director from Energy Pro Corporation said, “After careful consideration Kaosu Packing chose Solar Frontier’s CIS thin-film modules, due to their high performance energy output, and the reliability of their made-in-Japan quality and long-term commitment to maintenance. The operation of the panels started in late May and has provided consistent energy generation for the operation of Kaosu Packing’s factories.”

“Kaosu Packing provides packing protection to companies in a wide range of sectors, from consumer appliances to heavy industry, and has – as part of its mission statement – a strong commitment to the environment. We are honored to have our CIS thin-film panels chosen by Kaosu Packing for their factories. As Solar Frontier’s premium CIS thin-film solar panels have been designed with real world conditions in mind, they are a reliable solution year-round to help achieve CO2 reduction, promote green energy and save electricity. We are pleased we are able to assist Kaosu Packing in their environmental commitment goals,” said Yuichi Kuroda, Executive Officer of Solar Frontier.

The company in a statement said that it will continue to provide solar solutions by harnessing the power of the sun to make solar power more accessible and provide a cleaner, more comfortable life for all.