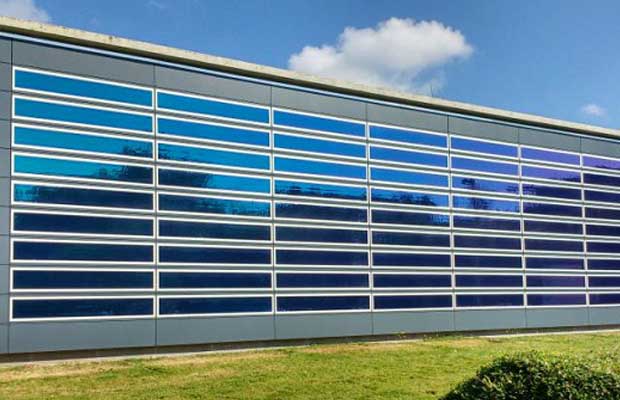 In 2016 the ENGIE Group acquired a 6.6% stake in Heliatek, one of the world leaders in the production of organic photovoltaic (OPV) films.

Solar films manufactured by German company Heliatek have been installed on ENGIE Laborelec’s building in Linkebeek, Belgium. The HeliaFilm organic films have been incorporated into the façade and windows and will enable the testing of new solar technology systems.

The energy sector is in rapid transition, meaning that in the future energy will no longer be generated and consumed in the way that it is today. Against this backdrop, in 2016 the ENGIE Group acquired a 6.6% stake in Heliatek, one of the world leaders in the production of organic photovoltaic (OPV) films. Together with Heliatek, ENGIE decided to retrofit the façades of the Group’s research centre, ENGIE Laborelec, in Linkebeek, for a new project involving the installation of their HeliaFilms.

Heliatek developed the façade elements with its partners AGC and SVK. The aim of this project is to investigate the ways in which solar energy can be generated from a building facade. The installation will also allow the building integration of this technology to be tested in real operational conditions.

The Heliatek solar films have been installed in two locations: directly on the SVK fibre cement façade elements on the south side of the ENGIE Laborelec building, and integrated into the AGC windows at the entrance to the building. An installation such as this shows how electricity generation can be combined with enhancement of the aesthetics and appearance of existing façades. The HeliaFilms on the façade and windows covers a total surface area of 50 m2 and the estimated annual power generation of 2,300 kWh is equivalent to the amount of electricity used by a small household.

New ENGIE-Heliatek projects are in the planning phase. Following the ENGIE Laborelec project, the two companies are also planing to install HeliaFilms on ENGIE Fabricom’s buildings in Antwerp by October.

Heliatek CEO, Thibaud Le Séguillon, said: “The completion of the façade demonstrates the ease with which HeliaFilm can be installed as a retrofit. Heliatek’s mission is to enable our customers to generate decentralized energy using our HeliaFilms and at the same time encourage the use of new technologies on existing infrastructures, such as the buildings themselves.”

Philippe Buxant, Research and Technologies Department ENGIE, added: “ENGIE aspires to lead the energy transition in Europe. We are convinced that solar energy will play an important role. In Heliatek we have found a partner that can offer interesting and innovative solar solutions with which we can benefit our customers. We want to meet the growing demand of customers for buildings with zero CO2 emissions and the lowest possible energy bills. The cost of these new photovoltaic films is falling all the time and we believe that they can be profitable without any subsidies.”