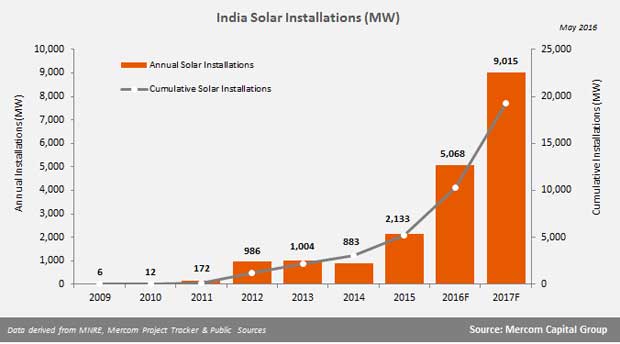 The solar projects in pipeline has surpassed 22 GW with ~13 GW under construction and ~9 GW in the Request for Proposal (RfP) process.

“The Indian solar market is growing in size but the question is: is it too much too fast, as infrastructure and systems have not kept pace with auction announcements. For the sector to move from 2 GW to a 10 GW a year market, work still needs to be done,” said Raj Prabhu, CEO and Co-Founder of Mercom Capital Group.

The government’s push towards solar has started to show results, at the end of FY2015-16, solar represented 2.5 percent of the net installed capacity in India, up from 1.4 percent a year ago, and was the fastest growing new energy source in the country said the r firm in a statement. 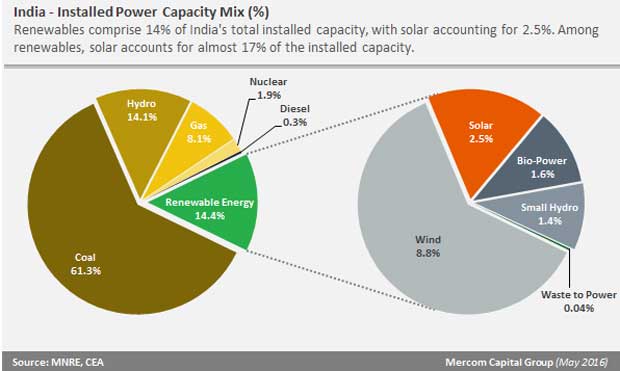 Low bidding levels have been a major concern at a time when the Indian banking sector is going through its own challenges, which could make borrowing much more difficult in the short-term. As per the Reserve Bank of India (RBI) data, bank loans worth Rs.7 lakh crore (~$103 billion) were under stress as of the end of 2015.

“There is no set rule which says tariffs below Rs.5 (~$0.0735) cannot be financed. Some banks are seriously looking at projects in the Rs.4.5-5 (~$0.0662-0.0735) tariff range, but financing depends on sound project economics, borrower credibility, a strong balance sheet and the developer’s ability to service debt,” said Raj Prabhu.