The battle between clean energy and dirty coal has entered a new phase. The International Energy Agency (IEA), an industry forecaster, this week reported that in 2015 for the first time renewable energy passed coal as the world’s biggest source of power-generating capacity.

The IEA, whose projections for solar and wind energy have in the past been criticised as too low, accepted that renewables are transforming electricity markets. Last year 500,000 solar panels were installed every day around the world. In China alone, home to a whopping 40% of the 153 GW of global growth in renewable-energy installations, two wind turbines were erected every hour. Based on existing policies, it forecasts that from 2015-21, 825GW of new renewable capacity will be added globally, 13% more than it projected just last year.

All those new solar and wind plants will not generate electricity all the time. Unlike coal, which burns around the clock, renewables are intermittent. But the IEA expects the share of renewables in total power generation to rise to almost 28% from 21%. Government policies to curb global warming and reduce air pollution are the driving force behind the clean-energy revolution, as well as falling prices of solar panels and wind turbines. The IEA expects America to eclipse the EU to become the second-biggest market for renewables (after China) in the next few years, thanks to an extension of federal tax credits to wind and solar producers. Because electricity demand in rich countries is falling, renewables are driving out other sources of electricity. But in developing countries, they are still not being built fast enough to keep up with demand. 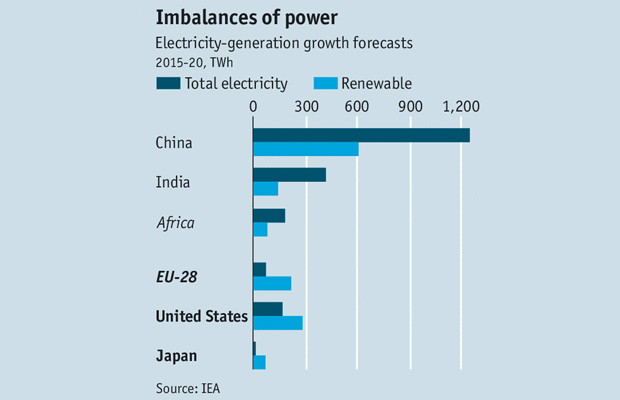 Lauri Myllyvirta, a Chinese-energy expert at Greenpeace, an environmental NGO, says the IEA may still be underestimating the “exponential growth dynamics” of renewables. For instance, more grid-connected solar energy was installed in China in the first half of 2016 than in the whole of last year, he added.

Yet coal is also showing surprising resilience. Earlier this year the betting was that thermal-coal prices would sink because of falling investment in new coal-fired power plants and a decline in long-term demand. Since mid-year, however, they have doubled to $100 a tonne. The reason, again, is China. Its authorities imposed restrictions on its debt-strapped coal miners, limiting them to 276 working days of production a year, in order to push up prices. Partly because of rampant speculation in the Chinese futures market, the measures worked better than expected. Faced with an unwanted surge of imports, the government has since set out to loosen them. Yet if the rally continues, it would give a further fillip to the green brigade: higher coal prices will squeeze the margins of their dirty rivals.