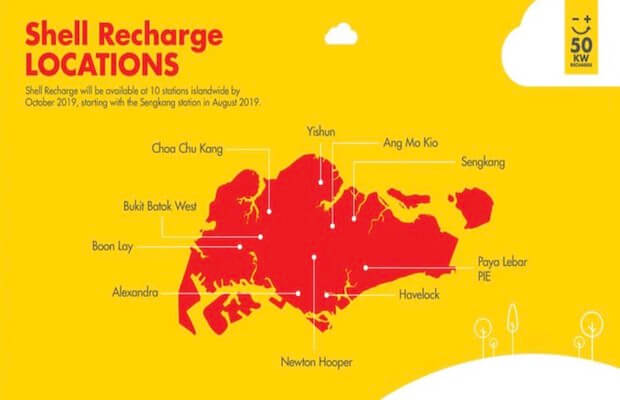 Royal Dutch Shell has announced that it has successfully debuted its Shell Recharge electric vehicle (EV) chargers at petrol stations in Singapore, the company’s first such foray in Southeast Asia.

The electric vehicle charging service, Shell Recharge, will be available at 10 Shell petrol stations in Singapore by October, this year or about 20 percent of its retail network in the city-state, the company revealed.

For S$ 0.55per kWh, the chargers typically provide from 0 percent to 80 percent charge in about 30 minutes and are compatible with most electric vehicles in Singapore. A Shell-commissioned study on electric vehicle consumer behaviour previously showed that 52 percent of Singaporeans are deterred to buy or use an electric car as they think there are not enough charging stations in Singapore, the company said.

Shell plans to make more of such low-carbon energy solutions available in Singapore in the following months and years, Peng added.

Earlier this month, Shell had announced that it will be installing rooftop solar plants on the roofs of seven of its plants in India, China, Italy, Singapore and Switzerland, which would generate 7,500 MWh of power annually.

The panels can result in the avoidance of greenhouse gas emissions of about 4,500 tonnes on a CO2-equivalent basis per year, equivalent to taking about 2,600 cars off the road for one year.

In India, it said, the panels will be installed at the company’s lubricants plant in Taloja, Maharashtra. The company will work with Cleantech Solar for the installation of about 1,700 panels, which is expected to generate 683 MWh of electricity annually, and can result in the avoidance of 500 tonnes of annual GHG emissions.