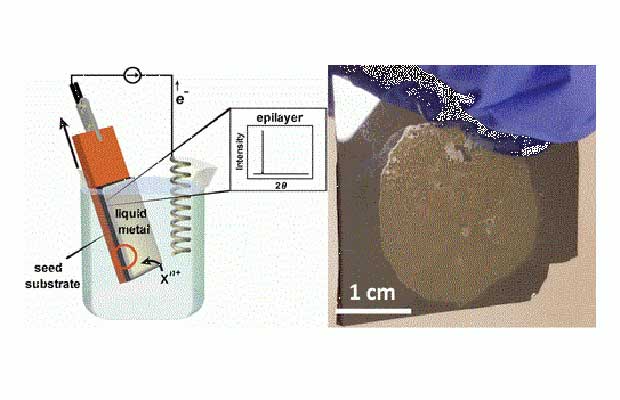 Researchers at University of Michigan (UM) in the US invented a method to simultaneously synthesise and deposit crystalline semiconductor films from water at room temperatures using equipment that can be assembled for just a few dollars.

Scientists have developed a greener and cheaper way to make single-crystalline semiconductor films, components at the heart of our electric gadgets, including smartphones, computers and solar panels.

However, such materials are typically only prepared at elevated temperatures, with complex machinery that involve hazardous gases.

Researchers at University of Michigan (UM) in the US invented a method to simultaneously synthesise and deposit crystalline semiconductor films from water at room temperatures using equipment that can be assembled for just a few dollars.

“Our method does not require excess heat, and everything is done in an aqueous solution so we are not using any toxic precursors,” said Stephen Maldonado, an associate professor at UM.

“And we are doing this without sacrificing any quality in the crystallinity of the material, which is usually the trade-off,” said Maldonado.

To do this, Maldonado and his team make a thin, liquid metal film that rests on a substrate that they connect to a power supply.

When they electrify the metal film, molecules on the surface of that film – if they are in contact with water – can be reduced into their elemental parts.

In this case, units of dissolved germanium oxide are transformed into germanium atoms that dissolve into the liquid metal film.

“If the liquid metal film is thin enough, the germanium atoms will precipitate out, but selectively at the bottom and as a uniform crystalline film,” Maldonado said.

“The cool thing about this is we are taking an oxidised precursor – like what you’d find in nature – and in one process step, we can produce a technologically relevant film that is one large contiguous crystal,” he said.

The team’s next steps will be to do the same process with silicon. The chemistry is more nuanced but the principle is the same.

Ultimately, without complex machinery and high temperatures, the new process could provide a cheaper, greener way to produce semiconductors.

“There is a reason why everyone on the face of this planet does not have access to advanced electronics. Making high performance semiconductor devices requires a substantial infrastructure,” Maldonado said.

The research was published in the Journal of the American Chemical Society.