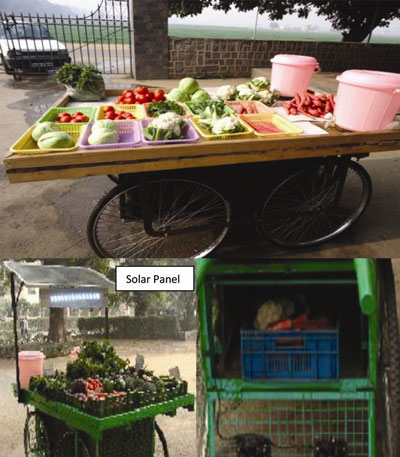 Scientists at Indian Agricultural Research Institute (IARI) have designed a solar-powered vending cart to increase the shelf life of vegetables. This will also reduce the usage of water on vegetables to keep them fresh on hot days.

According to the researchers the mobile vending cart was tested for its performance during summer season. Solar panels installed on the top of the cart generate electricity to evaporatively cool a closed chamber just beneath the vending platform. The minimum and maximum drop in temperature ranged between 8.1°C and 11.2°C, and the increase in relative humidity was observed to be up to 15% and 25% inside the vending card chamber in June.

The requirement of water ranged between 16.5 and 20.0 litre/day during summer. Researchers note that there was considerable effect on physiological loss in weight of different vegetables kept either inside or outside the mobile chamber. The freshness and shelf-life of vegetables increased substantially after storage in the evaporatively cooled cart. The evaporatively cooled cart can keep fruits and vegetables fresh for two to five days compared to conventional carts where most vegetables spoil in less than two days.

The evaporative cooling system of the cart uses solar power. A SPV 100 Wp/12 V solar module is used as the power source. It is used to run two forced air fans (DC, 12 V, 0.7 A, 8.4 W each) for the evaporative cooling system and LED bulbs to illuminate the cart during night. A 12 V/7 AH battery is also used to store solar power during the day and to run the system during night or on a cloudy day when solar radiation is not adequate

D. V. K. Samuel, an agriculture engineering specialist at the IARI speaking to The Telegraph said “The evaporative cooling of the chamber is similar to the way desert coolers work.”

According to IARI research group the evaporatively cooled vending cart can help maintain the freshness of vegetables for an average of five days, even longer for some vegetables – cabbage can remail usable for 10 days and cauliflower and carrots for seven days inside the cooled chamber.

Pramod Sharma, an agricultural engineering researcher who led the field experiments speaking to the publication said “The solar power vending cart is ideal for hot and dry weather.” Scientists have published the results of their field tests in the journal Current Science. The solar-powered vending cart is expected to be available for about Rs 30,000.