A micro fluidic lab-on-a-chip system that generates its own power is essential for stand-alone, independent, self-sustainable point-of-care diagnostic devices to work in limited-resource and remote regions. 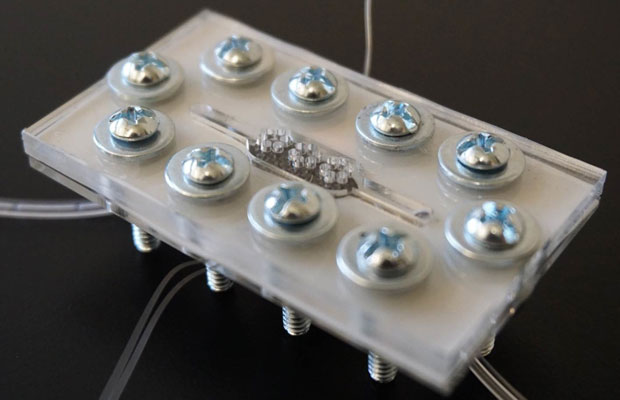 Researchers at Binghamton University, State University of New York have created a micro-scale biological solar cell that generates a higher power density for longer than any existing cell of its kind.

A micro fluidic lab-on-a-chip system that generates its own power is essential for stand-alone, independent, self-sustainable point-of-care diagnostic devices to work in limited-resource and remote regions, said Binghamton University Electrical and Computer Science Assistant Professor Seokheun Choi. Miniaturized biological solar cells (or micro-BSCs) can be the most suitable power source for those applications because the technique resembles the earth’s natural ecosystem.

“However, the promise of this technology has not been translated into practical applications because of its relatively low power and current short lifetimes.”

Choi and PhD candidate Lin Liu created a microscale microfluidic biological solar cell that can attain high electrical power and long-term operational capability, which will provide a practical and sustainable power supply for lab-on-a-chip applications. The bio-solar cell generated the highest power density for the longest time among any existing micro-scale bio-solar cells.

“The device will release biological photo-energy conversion technology from its restriction to conceptual research and advance its translational potential toward practical and sustainable power applications for point-of-care diagnostics to work independently and self-sustainably in limited-resource and remote regions,” added Choi.