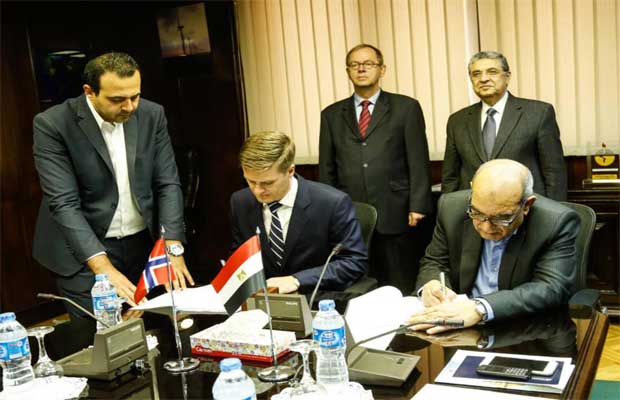 Located in Ben Ban area near Aswan in Upper Egypt, the 400 MW Solar PV plants are expected to generate about 870 GWh of solar power per year.

Scatec Solar and partners have signed 25-year Power Purchase Agreements for delivery of electricity from six solar PV plants totaling 400 MW (DC) with the Government of Egypt. The signing ceremony took place in Cairo on April 13 in the presence of Egyptian Minister of Electricity and Renewable Energy Dr. Mohamed Shaker El-Markabi and the Ambassador of Norway Mr. Sten Arne Rosnes.

All located in Ben Ban area near Aswan in Upper Egypt, the solar plants are expected to generate about 870 GWh of solar electricity per year. These solar PV projects are part of the 2 GW solar FiT programme launched by the Egyptian Government in 2015. The electricity produced from the 400 MW is expected to replace about 350,000 tons of CO2 emissions per year, supporting Egypt’s emission reduction targets under the Paris Climate Agreement.

‘With this programme the Government of Egypt is making important steps towards accessing clean and low cost electricity to drive development and economic prosperity. Scatec Solar and partners are making significant investments and long term commitment to Egypt” said Raymond Carlsen, CEO of Scatec Solar.

Total investments for the 400 MW of solar PV plants is estimated to USD 450 million and the plants are expected to generate annual revenues of about USD 60 million over the 25-year contract period. Scatec Solar will build, own and operate all six projects and Scatec Solar’s share of equity investments will be in the range of USD 50-70 million. Scatec Solar is partnering with local developers and with KLP Norfund Investments for equity investments in the solar PV projects and may add additional partners to an equity consortium before financial close.

European Bank for Reconstruction and Development (EBRD) is leading a consortium of banks that is expected to support the six solar PV projects with a total debt of up to USD 350 million.

Scatec Solar is a leading developer and owner of large-scale solar plants in Africa, Europe, Middle East and Americas. With the latest addition, Scatec Solar’s project backlog consists of 1,131 MW.