Reshaping the Future of the Electric Grid Through Low-Cost, Long-Duration Discharge Batteries

A new era of energy provided by renewables may be close, thanks to research begun at the Joint Center for Energy Storage Research (JCESR), a U.S. Department of Energy (DOE) Energy Innovation Hub led by DOE’s Argonne National Laboratory, and continued at its spinoff company, Form Energy. 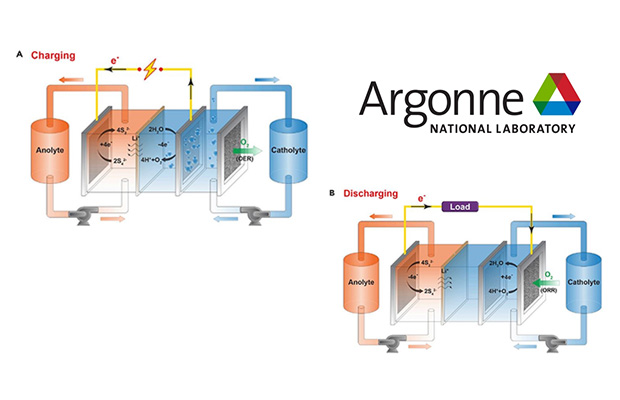 Form Energy sprang out of JCESR research on the air-breathing sulfur battery. (Image courtesy of JCESR)

The challenge JCESR addressed is long-duration energy storage – stabilizing a renewable grid against several consecutive days of calm or overcast days when wind and solar generation is absent or severely limited. Today’s lithium-ion batteries can discharge at full power for 4-6 hours, enough to stabilize against most intra-day variations due to passing clouds or fluctuating winds, or to extend solar electricity a few hours past sunset to serve the evening demand peak, according to Yet-Ming Chiang, a JCESR member, co-founder of Form Energy, and professor of materials science at the Massachusetts Institute of Technology.

Pivotal JCESR research first laid out the case for an air-breathing aqueous sulfur chemistry in long-discharge applications, comparing this kind of battery against established technologies, such as Li-ion and pumped hydroelectric storage and other emerging technologies, such as underground compressed air storage. Later studies showed that renewable generation combined with storage, with very-low-cost new chemistries, could deliver electricity in many U.S. locations more cheaply than coal or nuclear power plants and cost-competitively with natural gas. Meanwhile, the Advanced Research Projects Agency–Energy (ARPA-E) at DOE also was looking to explore long-duration discharge storage in its program called Duration Addition to electricity Storage (DAYS).

In 2017, Chiang co-founded a startup company based on JCESR intellectual property with Boston-area colleagues Ted Wiley, Billy Woodford, and Marco Ferrara. The company was renamed Form Energy when it merged with a West Coast startup founded by Mateo Jaramillo, a former executive at Tesla and now Form Energy’s CEO.

“We are thrilled that Form Energy commercialized JCESR’s innovations for long-duration discharge batteries so quickly. This is a model for how the lab to market transition should work,” said George Crabtree, JCESR director.

In May 2020, Form Energy signed its first contract with Minnesota-based Great River Energy, one of the largest generation and transmission cooperatives nationwide. This pilot project will deliver a battery system, planned for 2023, designed to discharge over 150 hours at 1 megawatt power (equaling 150 MWh of capacity).

To date, Form Energy has secured about $120 million of private investment and U.S. government support through the ARPA-E DAYS project.