Researchers at The Australian National University (ANU) have found a new way to fabricate high efficiency semi-transparent perovskite solar cells in a breakthrough that could lead to more efficient and cheaper solar electricity. 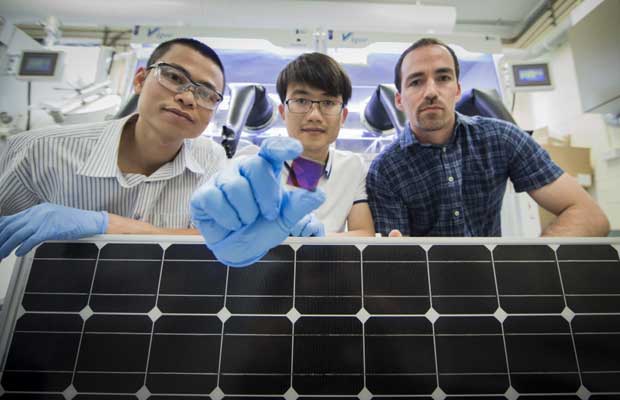 “The prospect of adding a few additional processing steps at the end of a silicon cell production line to make perovskite cells is very exciting and could boost solar efficiency from 25 per cent to 30 per cent,” Dr White said.

“By combining these two cells, the perovskite cell and the silicon cell, we are able to make much better use of the solar energy and achieve higher efficiencies than either cell on its own.”

The new fabrication method involves adding a small amount of the element indium into one of the cell layers during fabrication. That could increase the cell’s power output by as much as 25 per cent.

“We have been able to achieve a record efficiency of 16.6 per cent for a semi-transparent perovskite cell, and 24.5 per cent for a perovskite-silicon tandem, which is one of the highest efficiencies reported for this type of cell,” said Dr White.

Dr White said the research placed ANU in a small group of labs around the world with the capability to improve silicon solar cell efficiency using perovskites.

The development builds on the state-of-the-art silicon cell research at ANU and is part of a $12.2 million “High-efficiency silicon/perovskite solar cells” project led by University of New South Wales and supported by $3.6 million of funding from the Australian Renewable Energy Agency.