Renewable Sector Springs Back to pre-COVID Levels in India: CEEW-CEF

The renewable energy sector in India has rebounded to pre-COVID-19 levels in Q3 FY21 following the restoration of supply chains, per CEEW-CEF

The renewable energy sector in India has rebounded to the pre-COVID-19 levels in Q3 FY21 following the restoration of supply chains, according to a new quarterly analysis release by the CEEW-Centre for Energy Finance (CEEW-CEF).

Signaling an economic recovery, the report found that the peak power and energy demand consistently surpassed all months of Q3 FY20. RE capacity additions increased by 59 percent at 1.9 GW compared to Q1 FY21. RE generation also increased by 20 percent as compared to Q3 FY20. 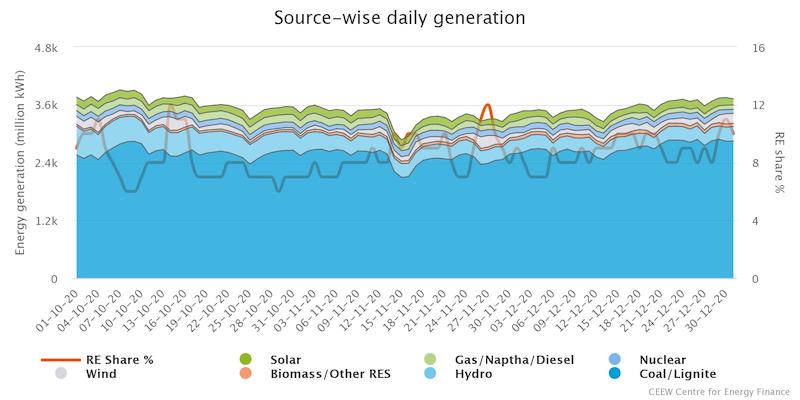 The CEEW-CEF Market Handbook also highlighted that coal capacity addition declined further as compared to Q2, with net Q3 addition of 369 MW (versus 550 MW in Q2), which was less than 20 percent of renewable energy additions. Among renewable categories, solar (grid-scale and rooftop) continued to dominate, accounting for 73 percent of the capacity added in Q3 FY21.

Arunabha Ghosh, CEO, CEEW, said, “India offers one of the largest renewable energy markets operating on market principles. The performance of the RE sector in this quarter has further reiterated the promise the sector holds. To meet the 450 gigawatts renewables target, India needs investments worth more than USD 200 billion for generating capacity alone. Significant additional funds will be required for supporting infrastructure such as storage and transmission. The focus must now be on reducing the cost of finance and embracing innovative financing models such as a time-bound credit enhancement scheme to accelerate the growth of the sector.”

The report also indicated a decline in quarterly capacity auctioned, with 2.97 GW RE capacity auctioned in Q3 FY21 (versus 4.4 GW and 3.2 GW auctioned in Q1 FY21 and Q2 FY21, respectively). This could be a result of challenges faced by the Solar Energy Corporation of India (SECI) in finding adequate buyers for the previously tendered, higher tariff capacities in the face of rapidly declining tariffs and discom grid integration challenges.

Coal Could Boom in India if Renewables Can’t Keep up With Growth: Rystad
Also Read

Nikhil Sharma, Associate, CEEW-CEF, said, “SECI needs to ensure power purchase assurance with discoms to attract bidders and provide an upside of the rapidly declining tariffs to discoms to regain momentum in the quarterly capacity auctioned.”

During the quarter, India also discovered its lowest ever renewable energy tariff at the Gujarat Urja Vikas Nigam Limited (GUVNL) auction. According to the analysis, access to low-cost financing and power purchase assurances with identified Discoms in Gujarat and Rajasthan were key factors behind such low tariffs. International developers may access debt at ~7 percent (fully hedged basis) and Indian developers with good credit ratings may access domestic debt via the bond market at ~7-7.5 percent, which is well below India’s typical commercial lending rates.

On the Discom payables front, the report indicated only a 1 percent increase in overdues in Q3 FY21, as compared to a 30 percent spike in Q1 FY21. As of December 2020, the amount overdue by Discoms was Rs 1.43 lakh crore.