Home » News » Renewable energy is a key to Energy Security in the future: Piyush Goyal

Renewable energy is a key to Energy Security in the future: Piyush Goyal 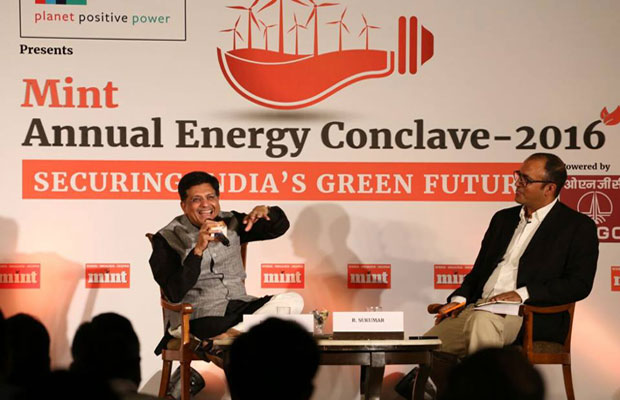 Power, Coal, New & Renewable Energy and Mines, Minister Piyush Goyal at ‘Energy Conclave, 2016 – Securing India’s Green Future’ noted that India has its own developmental imperatives in the near future, hence it cannot shun the use of fossil fuels completely from its energy basket.

He said it is important to strike a balance between the conventional & renewable sources of energy and rapid societal development & environmental concerns, he added.

Goyal expressed contentment to see renewable energy taking centre stage in discussions on power sector. He stated that it is important to achieve the goal of ‘One Nation, On Grid, One Price’ at the earliest and create a robust transmission grid network where affordable power is seamlessly available to the common man throughout the Nation.

The Minister informed the gathering at the event that by consistent efforts made by the Government the prices of solar energy have come down by 40% in just 18 months. Moreover, concentrating on other sources of renewable energy, this year has been dedicated to hydro and wind energy and talks with international gas suppliers are on.

The Ministry is in talks with PSUs like BHEL, NTPC and other private sector power generators on taking various measures to reduce coal imports and achieving criticality in plants designed to operate on imported coal, by making design modifications to enable use of abundant domestic reserves of coal said the minister at the event.

Goyal also discussed a range of issues like success & challenges in implementation of UDAY scheme, energy efficiency & cost effectiveness of UJALA LEDs and reinvigorating Ultra Mega Power Projects through coal linkages, among others.