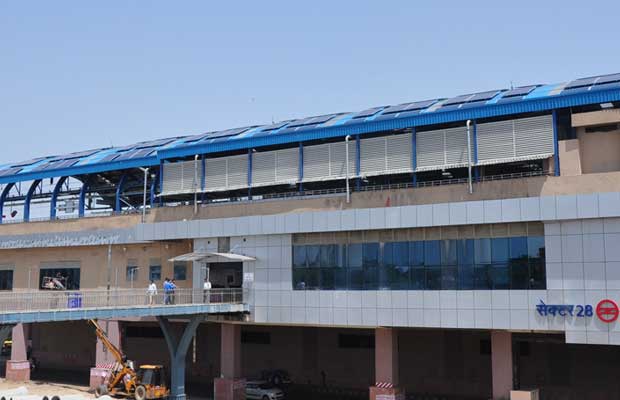 ReNew Power has signed PPA with Delhi Metro Rail Corporation (DMRC) for 6MW solar rooftop project across various metro stations in New Delhi. The Power Purchase Agreement has been signed for a term of 25 years.

The major lines allocated under this PPA are Dwarka Sector 21 to Rajiv Chowk; Badarpur to Central Secretariat and a few others are expected in the future. Major stations that will be covered within these lines include Badarpur, Tughlakabad, Dwarka Sec 21, Airport Depot, Govindpuri, Sarita Vihar, Kaushambi, Karkarduma, Yamuna Bank and Kirti Nagar. The rooftop solar project is expected to be completed by February 2017.

ReNew power in a statement said that  the project will generate more than 8 million units of power annually and offset over 7,000 tons of carbon emissions every year.

With nearly 5 MW capacity planned to be executed in parking lots, this project is one of the largest solar system installation in parking lots in the country.

Solar PV Carports shall cater energy to metro stations and will also facilitate parking space for two and four wheelers.

Sumant Sinha, Chairman and CEO, ReNew Power said, “ReNew Power is proud to be instrumental in accomplishing DMRC’s initiative of going solar. As we look forward to the implementation of this project, we also hope to be a part of many such ventures in future.”