Renault Group and Iberdrola today signed a strategic partnership to reduce the CO2 emissions of Renault’s energy consumption in Spain and Portugal. Under the agreement, Iberdrola will supply green energy on a long-term basis, while implementing heat electrification and energy efficiency systems at the manufacturer’s facilities. Additionally, Iberdrola will analyse on-site renewable projects, electrify mobility and re-use car batteries to store energy for the plants.

The alliance will allow Renault to advance towards its Zero Carbon Footprint, as established in its Renaulution Strategic Plan, by supplying plants with green energy and using Big Data for energy efficiency purposes, among other measures. The agreement further strengthens Iberdrola’s electrification strategy and illustrates how decarbonisation can make nations more competitive and resilient. 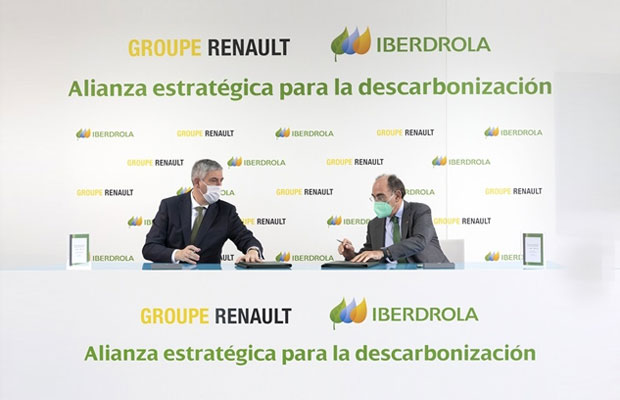 Renault, a leading electric vehicle manufacturer, and Iberdrola, a world leader in renewable energy, have signed a strategic alliance to decarbonise Renault’s plants over the next three years. Renault Group in Spain will strongly contribute to the company’s global commitment to bring down emissions from its plants across the world by 50 % in 2030. At the same time, Iberdrola reinforces its leadership in the strategy to decarbonise industry and the economy.

Iberdrola becomes the manufacturer’s renewable energy supplier through a long-term power purchase agreement (PPA) for 100% of Renault’s electricity needs in Spain. They will also work together on initiatives such as the electrification of heat from thermal processes, the analysis of possible efficiencies in plant energy management through Big Data, the implementation of on-site renewable projects (photovoltaic and wind power plants at their facilities); as well as the reuse of electric vehicle batteries for energy storage to supply Renault.

Also included is the analysis and design of electric mobility and charging solutions both for internal use by the plants’ own fleets and for related charging (employees’ vehicles, third-party companies and end customers). In the case of charging, these solutions will be integrated and offered within the ZE READY TO CHARGE procedure developed by the Renault Group.

José Vicente de los Mozos, the Group’s industrial director and general manager of Renault Iberia, said: “As Renault Group firmly believes in our responsibility to the environment, one of our objectives is to achieve a zero-carbon footprint in our factories, making us the most environmentally committed automotive company. To this end, we are entering into agreements like the one signed today with Iberdrola which allow us to reduce CO2 emissions in our plants in an innovative way and in line with the 4.0 technologies we are now using. Actions like this allow us to continue working on the future competitiveness of our industrial facilities.”

For Iberdrola Chairman Ignacio Galán, the agreement showcases both companies’ commitment to decarbonisation. “We share the same vision for an emission-free economy and have the same goal. Today we are joining forces to reduce not only the emissions that vehicles produce during their lifetime, but also those that are generated through their manufacturing process. This will be the first carbon-neutral car-manufacturing facility, with renewable energy supply, electrification of heat, re-purposing of batteries and the possibility to use other technologies such as green hydrogen. With alliances like the one announced today, Iberdrola and Renault are putting our resources and know-how at the service of a more sustainable society”, he explained.

After signing the agreement, Galán and de los Mozos visited the factory where the batteries are assembled for the hybrid vehicles produced in Valladolid and Palencia. They also toured the production lines at the Bodywork and Assembly Factory where the plug-in hybrid Renault Captur is manufactured. Lastly, they visited the R&D&i centre in Valladolid which, with the allocations established in the Renaulution strategic plan, will be responsible for all new electrified products produced in Spanish plants.