IEEFA has detailed a ‘worrying’ precedent in South Australia where rooftop solar systems can be remotely switched off without householders’ knowledge.

A new briefing note from the Institute for Energy Economics and Financial Analysis (IEEFA) details a ‘worrying’ precedent in South Australia where new measures allow for rooftop solar systems to be remotely switched off without householders’ knowledge.

The rooftop solar cut-off measures give energy authorities powers to switch off solar panels and was used for the first time in South Australia on March 14, 2021, affecting around 12,500 households. 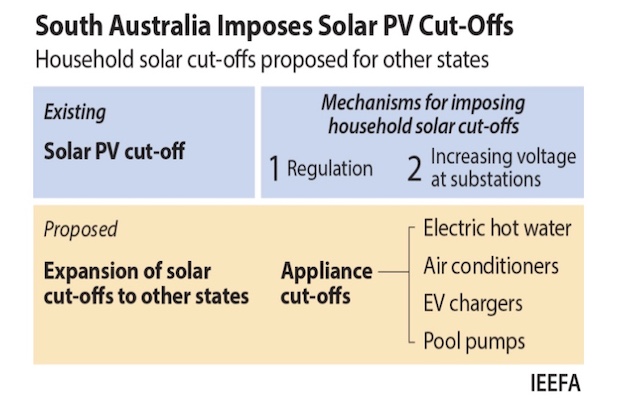 Finance Needs to be at the Centre of India’s ‘Net Zero’ Discussion: IEEFA
Also Read

“When this cut-off occurred, solar households were not compensated and everyone affected had to purchase electricity from the grid,” said Dr. Gabrielle Kuiper, a distributed energy resources (DER) specialist and IEEFA guest author. “It is a concerning development that state energy ministers are now considering similar regulations that would allow behind-the-meter appliances such as hot water systems, air conditioners, electric vehicle chargers and pool pumps to be switched off.

“This is a radical departure from the operation of the National Electricity Market (NEM) which has until this point not interfered in the running of behind-the-meter solar, Dr. Kuiper added. “Authorities should be focusing their efforts on accelerating the deployment of smart, dynamic technologies to modernise the grid rather than imposing crude cut-off mechanisms that reach in behind the meter and take control out of the hands of consumers. This is regulatory over-reach.”

Dr. Kuiper says there are other solutions being developed for when the grid is experiencing minimum demand using digitisation, power electronics, artificial intelligence and network management tools.

Bangladesh Needs a Renewables Focus, Not a Switch From ‘Coal to Gas’: IEEFA
Also Read

IEEFA calculates the cost of South Australia’s solar cut-off for about one hour on 14 March adds up to roughly USD 50,000 for all impacted households.

“It may sound like a trivial amount,” says co-author Steve Blume, President, Smart Energy Council. “But if solar cut-offs occur more frequently and for longer periods consumers could soon find themselves more substantially out of pocket, as they are forced to pay retail prices to buy electricity from the grid to replace their own self-generation capacity.

“Large energy users are compensated when they are shut down to assist system security, including through the Reliability and Emergency Reserve Trader (RERT), so why not small energy producers? Why is AEMO putting all the costs for managing the system in known circumstances of interconnector maintenance on distributed rooftop solar with no compensation?” Blume added.

The briefing note points to a lack of quantitative analysis of the issue identified by AEMO in South Australia of maintaining minimum demand levels for system security, meaning any budget to address this potential risk cannot be calculated.

“The solar cut-off regulation was rushed through with potentially costly cut-offs imposed on households which have and are making private investments in solar assets in record numbers,” concluded Dr. Kuiper. “Householders and business owners should be able to determine how they run their behind-the-meter appliances within the parameters set dynamically by the distribution companies or the system operator as needed, rather than being centrally controlled.”

Electric Vehicles to Cost Less Than ICE Vehicles in EU by...

Airports A Better Option Than Households for Rooftop Sola...