REC Group, the largest European solar PV brand with over 500MW of installed capacity in Indian subcontinent, has announced the successful certification of its Alpha series by the Bureau of Indian Standards. The Alpha series, based on the breakthrough Hetero junction technology (HJT) offers a high quality option to Indian buyers now, especially those looking beyond China origin options for their equipment needs. The firm is focused on the rooftop segment, especially the C&I (commercial and Industrial) segment within that.

REC claims that the superior quality, performance and warranty backed by real data and consistently over performing systems has helped the Alpha series get off to a strong start in global markets, especially Europe, the US and Australia. The BIS certification finally helps the firm make it available for its Indian customers too.

The REC Alpha Series, based on the advanced Heterojunction technology (HJT) seeks to combine the best of two worlds, N-type monocrystalline and thin-film solar. Thanks to a revolutionary technology and a patented panel design, the firm claims that the 60-cell REC Alpha Series churns an output of up to 380 Wp and a outstanding power density of 217 watts per square meter. This results in providing around 20% more power than conventional p-type Mono panels of 320 Wp with the same area. The increased power and efficiency performance are backed by REC’s 25-years ProTrust Warranty Due to the advanced cell connections, Alpha cells are also 100% lead-free.

REC‘s panels were recently recognized as a Top Performer in the annual DNV-GL PV Module Reliability Scorecard for fifth year in a row. In India REC claims that its panels have been subject to rigorous third-party testing and the results from the field have proved to be consistent, with REC panels clocking an average of 0.68% degradation in 3.8 years 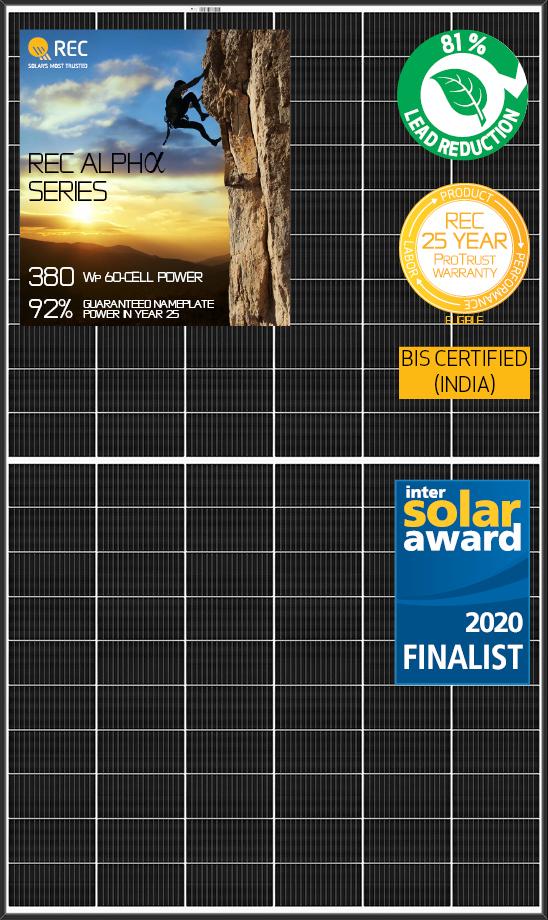 The Alpha Series: High On Promises

“With the REC Alpha Series we are setting a new benchmark in the Indian solar industry which is dominated at the moment with poly and mono crystalline technologies. The HJT is the future of the solar PV since it is a module-level innovation combining two tested technologies- thin films and N-type mono.

With this, we aim to provide the very best to our dedicated and technology savvy Indian customers who are looking for a world-class product build to last for 25 years”, commented Rohit Kumar, Director, REC Group India. To increase its outreach for the Alpha Series, REC is also looking into expanding its network of  regional distributors and REC Certified Solar professionals and those interested can reach out to company representatives by registering on this link: http://www2.recgroup.com/l/547502/2020-06-23/3g1188