Each solar tree is capable of operating a 5HP submersible pump, which can irrigate 15 acres of land normally. 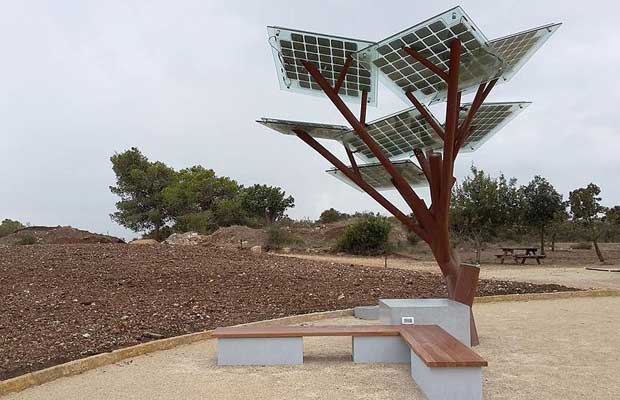 Rajendra Prasad Central Agriculture University (RAU), Pusa (Samastipur), has developed ‘solar tree’ for irrigation in areas where there is no electricity and farmers are forced to use diesel pumping sets, especially in diara areas.

Scientist SK Jain, who has developed the solar tree, said, recently, five such solar trees were installed in Dhab areas of river Burhi Gandak at the university’s farm. “Each solar tree is capable of operating a 5HP submersible pump, which can irrigate 15 acres of land normally,” he said adding, “If sprinkler or drip irrigation system is used for water application then its command may be enhanced by about 40 percent.”

Jain further said that the solar trees, which have attractive design and about 20 % more efficiency, have another advantage as almost no land is required for hoisting the solar panels, while normal installation of 1 KW capacity gen set requires minimum 10 square meter area. It also reduces the threat of intentional damage to the solar panels for which farmers are generally afraid of. “The cost of irrigation also came down, i.e. almost to one-third of the cost of irrigation from a normal diesel engine. Benefits of dependable green source of energy may be considered as bonus,” he added.

According to university sources, the system will be further evaluated by a team of scientists for its economic cropping pattern and efforts will be made to include it in the subsidy programme of the government.