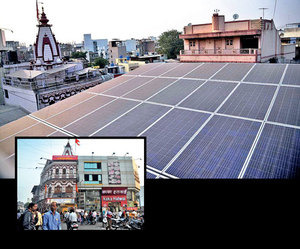 In a significant development, Laxmibai Dagdusheth Datta Mandir, a famous temple in Budhwar Peth in Pune has installed a solar power generation plant that has become its exclusive power supply source.

Besides, these solar panels have been designed to generate around 23 kilowatts of power every day, of these temple will usually need a mere 9 kW— the rest will be diverted to the electricity grid of the Maharashtra State Electricity Distribution Company Limited (MSEDCL).

According to the members of the temple trust, the feel that energy consumption might increase for them during major festivals that take place around the year, while the total power generated by the plant will definitely suffice.

“I think that as a religious group, it is our responsibility to initiate such social responsibility projects and set an example for others, too. The idea of putting up these solar panels for us was to disseminate the concept among the masses of using non-conventional forms of power generation,” Advocate Shivraj Kadam Jahagirdar, one of the members of the Laxmibai Dagdusheth Halwai Datta Mandir Trust said.

“The initiative taken by this temple trust is a welcome move — it will also help create awareness amongst the general public about such systems. This type of power generation has only an initial capital cost, after that, it is all green energy. The plant will divert 80-100 units of energy per day to our grid, further providing electricity to some 20 houses.” an official from MSEDCL said.