Premier Energies In Strategic Alliance With Azure Power; To Supply 600 MW Modules For Next 4 Years 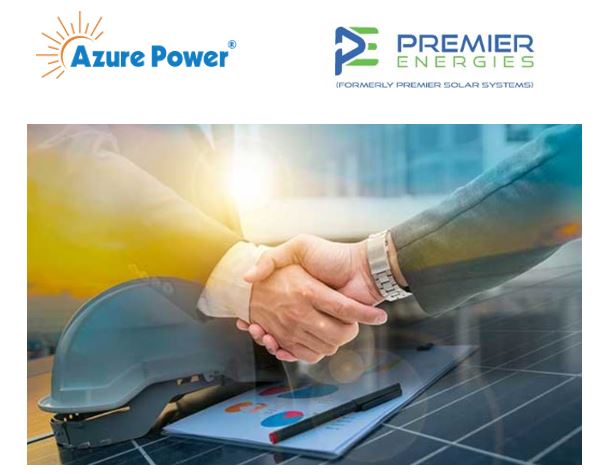 Solar manufacturing company Premier Energies Group has announced that it has entered a strategic alliance with renewable power producer Azure Power Global Limited. The official statement of Premier said that under the Module Supply Agreement, the company will supply 2.4 GW of solar cells and solar modules over the next four years. The value of the estimated order value is of over Rs 4,000 crore.

Record US $14.5 b Investment In Indian RE In Last FY
Also Read

Azure has also entered into an agreement to invest Rs 100 crore  (~US$ 12.9 million) in the Premier Group, of which an investment of Rs 45.5 crores (~US$ 5.9 million) has been made for the subscription of equity shares & compulsorily convertible debentures issued by Premier Energies Investment Private Limited (“PEIPL”), towards subscription of 26% shareholding in PEIPL. The balance of Rs  54.5 crores (~US$ 7 million) will be made in the form of subscription to optionally convertible debentures issued by Premier Energy Limited (“PEL”). PEIPL is setting up a 1 GW cell and module manufacturing facility in India as part of its expansion plans.

Premier says that the manufacturing facility will create 1000 jobs directly and help augment ancillary industry creating over 2000 local jobs. Premier says that with this expansion, the Group will become one of the largest employers in aggregate terms in E-City, Telangana.

Chiranjeev Saluja, MD, Premier Energies, informed, “This is the first of its kind strategic partnership between Independent Power Producer and Solar Manufacturing company in India.