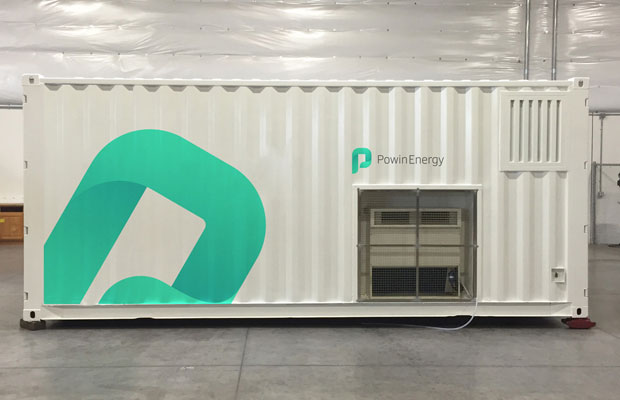 Powin Energy, a leading manufacturer and developer of scalable energy storage systems for commercial and utility customers has announced that its 2 MW/8 MWh Millikan Ave. Battery Energy Storage System (BESS) in Irvine, California, is officially online. The Millikan Ave. BESS provides emission-free and highly reliable critical peaking capacity and grid support services to Southern California Edison (SCE). Powin Energy developed the project and manufactured, installed, and commissioned the system in less than six months from the date the project was awarded, an industry first for an energy storage asset of this size on a distribution system.

“The natural gas and resulting capacity shortages due to the Aliso Canyon emergency shutdown necessitated that we bring this project online by the end of 2016. I am so impressed by our team’s performance on this project — everyone worked long hours over the holidays to meet this incredibly short project timeline,” said Geoff Brown, President of Powin Energy. “This also would never have been possible without the support of our project partners at HMT Electric and Eaton. I’d also like to thank SCE and the City of Irvine for their extensive support completing this interconnection and permitting process in record time.

“This project’s success was essential for Powin. It allowed us to demonstrate how quickly our system can be deployed and how our bp-OS software eliminates many of the hardware components that other battery vendors use for calibration and balancing. We strongly believe that deploying grid support resources in months rather than years and at a fraction of the cost of a gas peaker plant presents the power industry with an attractive alternative to serve their peak capacity needs.”

The Powin Energy BESS is interconnected on the Virgo 12 kV distribution line out of the Estrella 66/12 kV substation and can deliver 2 MW of power for over four continuous hours, providing a reliable and continuous source of energy during peak demand events. In addition, the system will supply regulation and flexible capacity support as needed. The storage system consists of over 2,400 Li-ion battery packs, each containing 3.7 kWh of lithium iron phosphate prismatic modules. Eaton provided the power converter, transformers, and switchgear. Powin Energy’s project was selected through a competitive solicitation initiated in response to the California Public Utilities Commission’s (CPUC) Aliso Canyon Energy Storage (ACES) request for energy storage systems that could be operational by the beginning of 2017.

Powin’s BESS is controlled by the company’s BP-OS, which includes the industry-exclusive Battery Odometer and Warranty Tracker that was patented in both the United States and China in 2016.