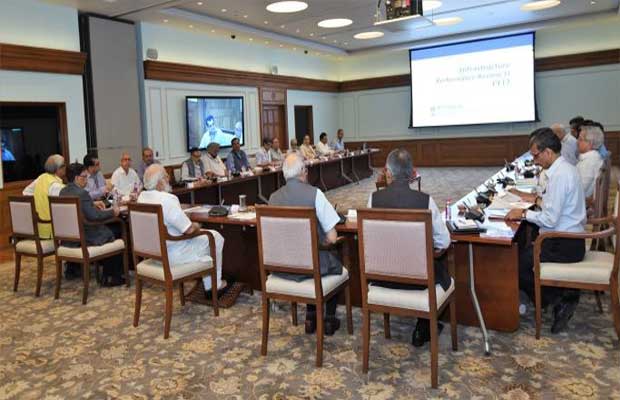 “Remarkable progress has been made in several sectors, including generation of renewable energy, affordable and rural housing, LED bulbs etc.”

The review meeting, which came soon after the review of connectivity-related infrastructure sectors in the last week of April, was held yesterday and attended by top officials from PMO, NITI Aayog and all infrastructure Ministries of the central government.

In course of the presentation made by the CEO of NITI Aayog, it was noted that remarkable progress has been made in several sectors, including generation of renewable energy, affordable and rural housing, LED bulbs etc.

The Pradhan Mantri Ujjwala Yojana has benefited 1.98 crore BPL households so far. The contribution of gas to the primary energy mix has risen to 8 percent. 81 cities are being covered under City Gas Distribution networks.

The Prime Minister called for greater emphasis on ethanol blending, and evolution of mechanisms so that farmers can benefit the most from this process.

He said that second generation bio-ethanol refineries should be expedited to utilize agricultural residues for this purpose. PM on twitter post said “Our focus is on boosting solar equipment manufacturing. The energy sector will gain & employment opportunities will also increase.”

The rural electrification programme is proceeding swiftly, with over 13,000 villages electrified out of a total of 18,452, and is on track for completion within the targeted 1000 days.

The total renewable generation capacity has crossed 57 GigaWatts, with an increase of 24.5 percent being registered in the last fiscal year. The capacity addition in solar energy in FY17 was the highest-ever, at 81 percent. Solar and wind tariffs have now achieved grid parity, with rates well below 4 rupees per Kilowatt-Hour.

The Prime Minister called for establishment of some model solar cities, where the power requirement is fulfilled solely by solar energy. A similar effort can be made to make certain localities kerosene-free, he added.

The Prime Minister emphasized that manufacturing of solar equipment should be given priority, to drive employment generation, and derive maximum benefit from the renewable energy drive.

Under Pradhan Mantri Awaas Yojana, remarkable progress has been achieved in rural areas. IT and space-based applications are being extensively used to monitor progress of the scheme. Over 32 lakh houses have been completed in rural areas in FY17.

The Prime Minister also enquired about the training and skills being given to rural masons, who were involved with this scheme.

Seeking a consolidated approach to various schemes, such as electrification, IT networks and housing, the Prime Minister called for a focused approach on the 100 worst performing districts in each case.

He directed that future reviews should focus on problems at the district-level, so that the progress of poorly performing districts can be better monitored.