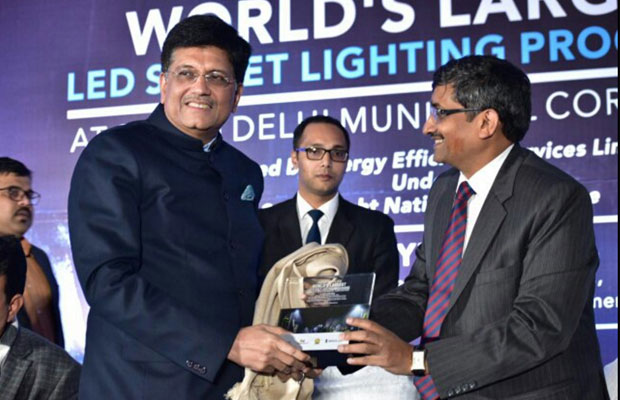 2 lakh Street Lights replaced in the South Delhi Municipal Corporation Area; Rs. 135 crores to be saved in next 7 years

Union Minister of Power, Coal, New & Renewable Energy and Mines, Piyush Goyal on Monday dedicated the LED based Street Lighting National Programme (SLNP) to the Nation. It is the World’s Largest Street Light Replacement Programme, which is being implemented by the Energy Efficiency Services Limited (EESL) and currently running in the South Delhi Municipal Corporation (SDMC) area.

The SLNP programme is presently running in Punjab, Himachal Pradesh, Uttar Pradesh, Assam, Tripura, Jharkhand, Chhattisgarh, Telangana, Andhra Pradesh, Kerala, Goa, Maharashtra, Gujarat and Rajasthan. A total of 15.59 lakh street lights have already been replaced in the country with LED bulbs, which is resulting in energy savings of 20.66 crore kWh, avoiding capacity of 51.47 MW and reducing 1.71 lakh tonnes of greenhouse gas emissions per annum said Ministry of Power in a statement . The energy efficiency market in India is estimated at US$ 12 billion that can potentially result in energy savings of up to 20 per cent of current consumption, by way of innovative business and implementation models.

Addressing the gathering, Goyal said that this Government does not believe in taking money from the people, on one hand, and subsidizing their electricity bills, on the other. Rather, the Government believes in empowering the people and the power infrastructure in the country so as to make available 24×7 Affordable, Quality Power to all Citizens of the country. The Minister added that the residents of SDMC area would benefit from the LED Street Lighting Programme as it would lead to a reduction in dark spots and increased security. Further, he added that the cumulative savings of Rs. 135 crores in next 7 years and Rs. 50 crores per annum beyond that, through this programme, would help in investment in social development initiatives and that too without the people needing to spend any extra money.

Under the SLNP, SDMC area alone accounts for over 2 lakh street light replacements. The cumulative annual energy savings in SDMC through this programme is 2.65 crore kWh which has helped to avoid capacity addition of 6.6 MW, resulting in a daily reduction of 22,000 tonnes of greenhouse gases. The Minister inaugurated the Phase II of the street lighting programme, under which EESL has signed a tripartite agreement with BSES and SDMC to install 75,000 more street lights with more focus on installation in parks.

On the occasion, Goyal launched the mobile app called EESL SL Complaint App for SDMC, wherein users can now lodge complaints about faulty street lights. These complaints will be addressed to within a period of 48 hours. Consumers can also WhatsApp on the helpline numbers 7827999111/ 7827999222 or they can send their complaints to [email protected]