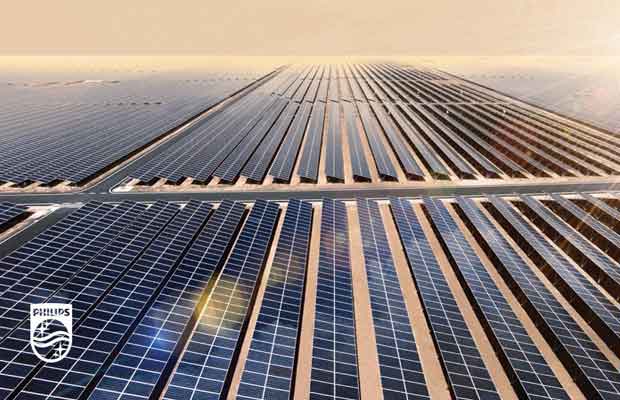 Philips Lighting has announced that it has purchased traceable renewable electricity from Dubai Electricity and Water Authority (DEWA’s) Mohammed bin Rashid Al Maktoum Solar Park in Dubai. The company has purchased through collaboration with ECOHZ. Philips Lighting is the first major international company to secure its renewable energy consumption in the Gulf region using the pioneering International REC Standard.

I-REC is a global standard for documenting renewable energy consumption used in regions where no similar documentation scheme exists. It is available in a growing number of countries and meets the robust criteria from RE100 – The Climate Group and CDP’s global initiative for influential businesses committed to 100% renewable power.

This latest step adds to the growing number of Philips Lighting operations fully powered by renewable electricity, living up to the commitments outlined in the company’s sustainability vision: Brighter Lives, Better World. This includes ambitious targets to be carbon neutral by 2020, and use only electricity coming from renewable sources in that same year.

“If we look around us, we see an ever increasing need for more energy. Through the sales of our energy-efficient lighting, we contribute to reducing lighting’s share of all global electricity consumption from the current 15% level to 8% in 2030. However, this alone is not enough. To keep our planet on course with the Paris agreement to mitigate climate change, we must fully switch to renewable sources of electricity. Partnering with ECOHZ enables us to keep to our part in this fiduciary duty,” says Nicola Kimm, Head of Sustainability, Environment, Health & Safety at Philips Lighting.

“Currently, around 1% of electricity in the Gulf region is generated from renewable sources. Looking at the great interest in renewable energy from multinationals operating in the region, this is not enough. Philips Lighting is taking a bold first step and is a great example of how corporate action can show this demand for traceable, credible renewable electricity,” says Tom Lindberg, Managing Director at ECOHZ.

Philips Lighting is one of the 96 influential companies committed to 100% renewable power and is a member of the collaborative, global RE100 initiative.

“It is inspiring to see Philips Lighting working to source renewables in an oil dominated market. Going 100% renewable makes business sense, and solutions are available – wherever operations are based. Together, RE100 members are creating change, and accelerating progress to a low carbon economy,” says Sam Kimmins, Head of RE100 at The Climate Group.

“Philips Lighting is showing real leadership by being the first corporate to complete an I-REC transaction in the Gulf region. Philips Lighting’s renewable-energy leadership sends a clear signal that companies in the Gulf region want traceable and credible renewable electricity. We urge other international companies in the region to follow suit by procuring and reporting renewable energy in 2017. We can all help the transition to a low-carbon economy,” says Pedro Faria, Technical Director at CDP.

The renewable energy certificates will be issued by the Dubai Carbon Centre of Excellence (Dubai Carbon) that has recently been appointed as the local I-REC issuer for the United Arab Emirates. The I-REC secretariat is working together with the I-REC Standard board and Dubai Carbon to ensure the I-REC Standard is implemented in the UAE in a reliable and transparent manner.