Over 12.3 GW of Wind-Solar Hybrid Tenders Issued in India Till Date: JMK

India has enormous potential for wind and solar energy. But, due to the intermittent and inconsistent nature of both solar and wind power, the Capacity Utilization Factor (CUF) for standalone solar and wind power plants is low. This issue can be partially resolved by blending the energy generated from the two sources as a hybrid system, improving CUF and ensuring greater reliability and grid stability. With a hybrid system, the CUF can be increased to about 50% vis-a-vis 20-35% CUF for standalone solar or wind plants.

The wind-solar hybrid market gained traction in India following the announcement of the National Wind-Solar Hybrid Policy 2018. Solar Energy Corporation of India (SECI) has taken the lead by regularly coming up with large tenders to scale up this market. The government is also focused on conducting auctions for Round The Clock (RTC) and hybrid tenders as well, to reduce the problem of intermittent supply and make clean power more competitive against traditional thermal plants.

In India, till date, the total capacity issued for wind-solar hybrid projects is 12.33 GW, out of which 6.26 GW capacity has been allocated.Hybrid tenders have been receiving good response from the market and are mostly fully subscribed with the lowest winning tariff in the range of Rs 2.41/ kWh- Rs 3.24/ kWh. Although, the only exception is the Wind Solar blended 2500 MW tender (80% wind and 20% solar) issued in Mar 2020 which was undersubscribed by 1530 MW. This specific tender was first issued as a plain vanilla wind tender but because of poor participation from developers, it was later converted to a wind-solar blended tender.

The auction conducted for SECI 1200 MW Hybrid ISTS-Tranche III tender in December 2020 had observed the record-breaking lowest tariff of INR 2.41/kWh. Last week itself, SECI has issued another 1200 MW wind-solar hybrid tender under tranche IV. The list below shows other key details of all the hybrid tenders issued:

Table 1: Summary of all wind-solar hybrid tenders in India 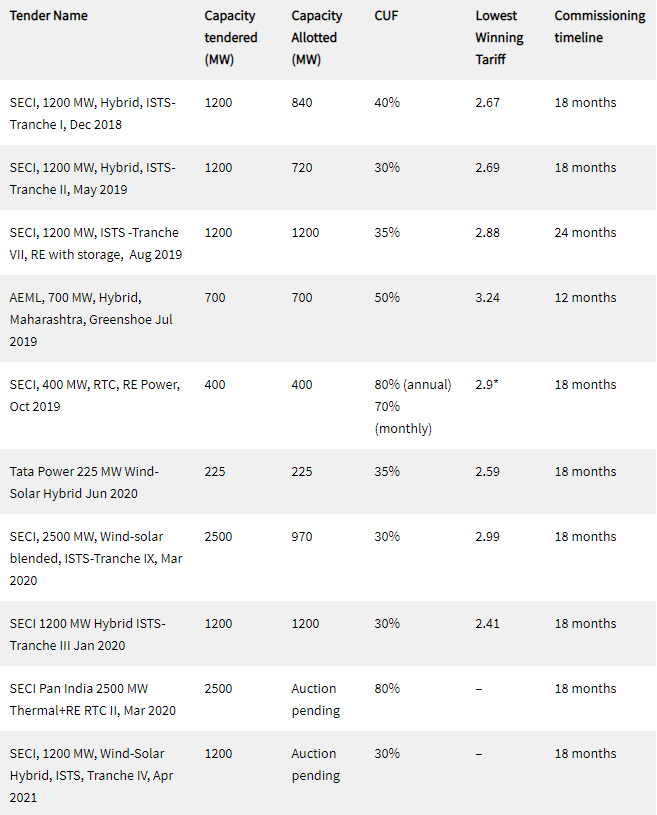 First year tariff is Rs.2.9/kWh with an escalation of 3% until the end of 15th year

Among all the players participating in these hybrid tenders, Adani and ReNew power are the most active players with a portfolio of 2290 MW and 820 MW respectively. Other active participants include SB Energy, Greenko, Tata Power, Vena Energy, JSW Group, ABC Renewables, AMP Energy, and ACME. JSW Energy with its first win of 810 MW project in the SECI, 2.5 GW, Wind-Solar blended tender (Tranche IX) also marked its debut in the renewable sector.

Apart from long-term PPA projects with discoms, some project developers, such as CleanMax and Continuum Wind Energy, have recently started building wind-solar hybrid portfolios through the third-party sale/open-access model for corporate consumers. Most of these players are exploring brownfield projects with good windy sites to build private RE farms to cater to growing demand from corporate consumers. CleanMax Solar has set its eye on building 300 MW of wind-solar hybrid capacity over the next 3 years. 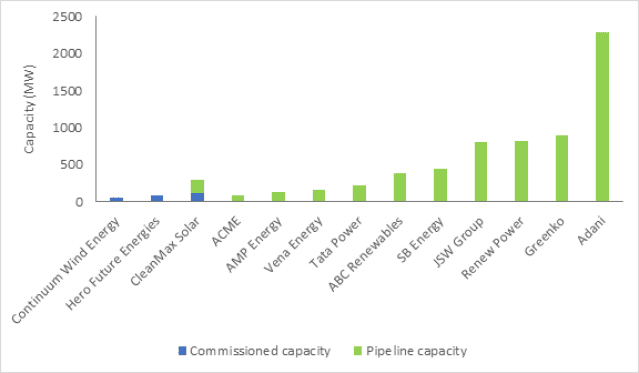 Even though hybrid projects make more sense, the scope is still limited for developers. As in most tenders, the minimum CUF of 30-40% is expected in the tenders, which means that most of the capacity must be wind-based. However, installing new wind capacity is a challenge as most of the good, high wind potential sites with grid access are already saturated. Implementation of a ‘co-location’ clause in certain tenders can also be dismal to the developers who are looking forward to a more flexible policy.