The National Solar Energy federation of India (NSEFI), the premier developer led body in the Solar sector, has made a fresh pitch to the MNRE for allowing part commissioning of solar projects in lots of 10 MW each.

In a letter dated April 16, to Indu Shekhar Chaturvedi, Secretary, MNRE, the Solar body has reiterated a request it had made earlier on September 17, 2021. Presently, even as wind developers are allowed to commission projects in lots of 10 MW each, utility scale solar developers are constrained to stay with minimum capacity of 50 MW for part commissioning of large projects. Wind developers had been allowed the facility on part commissioning of 10 MW lots, in a Letter dated January 13th, for the period till June 30, 2022. Specifically for the projects under SECI’s Tranche II to Tranche VIII.

While NSEFI’s earlier letter made the case for allowing smaller lots on the basis of the multiple supply disruptions developers had faced through 2020-21, be it in the form of issues at Source country (China), or even suppliers reneging on commitments, besides land acquisition issues where acquisition was happening piecemeal in some cases, the latest letter has a fresh urgency. 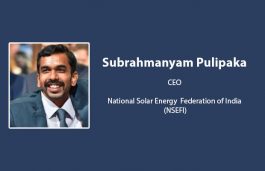 The body cites the tight power supply in the country, even as peak summer demand looms, to make its case. “…The situation is compounded further due to reduced coal supplies and outages of thermal power plants. The result of this is seen in the market-clearing price discovered on the exchanges, which have remained above Rs 8/kWh, on average, all through the months of March and April 2022. In such a situation, it is imperative that all available generation capacity be commissioned and used to increase the supply situation.”, says the letter from Subrahmanyam Pulipaka, CEO, NSEFI.

The NSEFI move makes sense for a favourable decision, not simply because of the facts they cite in terms of the power situation, but also because allowing partial commencement in smaller lots does not seem to contravene any of the terms of PPA’s signed between developers and various bodies, as liability for eventual supplies by scheduled commercial data will remain, as we understand it. With the precedence already available in the case of Wind energy projects to arrive at the process for billing and reconciliation, it is also probable that almost all these capacities will be well under the price the country is paying for thermal power currently.

While NSEFI has not projected any likely figure should the change be allowed, some industry insiders we spoke to have indicated that the incremental capacity figure between May and July could be around 300 MW across various projects. Keep in mind that projects that are scheduled to be commissioned fully will stay on track too.