NHPC’s Tariffs For 2000 GW ISTC Solar Adopted By CERC, But Regulator Not Happy

NHPC’s largest solar tender to date, the 2000 MW ISTS connected tender, which it concluded in July 2020 by allotting LOA’s (Letter of Award) to the 7 final successful bidders, has got tariffs for the projects adopted finally, after a slight delay. But what should have been a standard procedure turned into a slightly embarassing dressing down for the PSU, when the central regulator, CERC made its displeasure known and on record, for the PSU’s lackadaisical attitude to the process.

What Irritated The CERC?

The regulator picked on two issues. One, NHPC’s failure to advertise the RFS for the tender in two national papers. Instead, NHPC used its own web portal, besides one International paper edition, namely, The Asian Age, since the project called for  international competitive bidding. The CERC let this pass, as a circular by the MNRE on 21.1.2019 allowed bypassing the two newspaper requirement, despite it being there in the standard tender guidelines from earlier.

Now, post the whole process of bids (by 9 entities), followed by reverse auctions, a final list of five winners was arrived at. Along with their final bid prices.

The Final Five: Winners With NHPC

Now, NHPC, between July 15 2020 and October 19, 2020, managed to complete the signing of PPA’s and PSA’s with the bidders, and the respective discoms that committed to buy power from the project(s). And this is where NHPC slipped up. It inserted a change in the PPA, without taking permission from the CERC, as the guidelines specify. The change, namely” “….12.1.1(g) In case of change in Law on account of Anti-dumping Duty and/ or Safeguard Duty and/or Custom Duty on Solar PV Modules, the Solar Power developer shall be entitled for increase/ decrease in tariff. This increase/ decrease in tariff shall be for an amount equivalent to 0.5 paisa/kWh for every increase/ decrease of INR 01 (one) lakh per MW of impact on cost of Solar PV Modules, which shall be effected based on documentary evidence submitted to the concerned authority, which shall inter-alia include Bill of Lading (BL), Bill of Entry (BOE) at the Port of arrival, duty paid at the port of arrival, Lorry Receipt (LR), Goods Receipt (GR), insurance Papers/etc/ upto the Project Site.

This increase/ decrease in tariff due to this change in cost of Solar PV Modules shall belimited upto 150% (One hundred & fifty percent) of the Solar Project Capacity allocated to the Project Developer.”

And just like that, it ran afoul of the commission. The CERC noted that not only did the CPSU fail to inform it in time, it also made the mistake of filing an affidavit claiming no deviation from the guidelines, while contradicting itself with the two deviations made. And worse, it did not even request for a condonation of the two deviations. 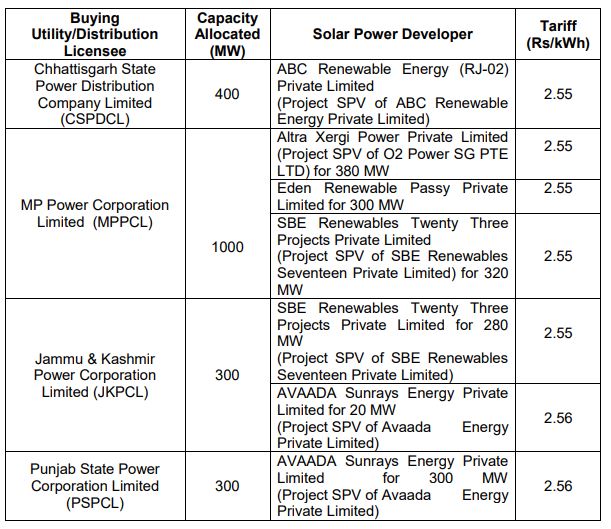 Thus, even while adopting the tariff, the regulator asked NHPC to go back to the developers to arrive at a fresh arrangement for the clause disallowed by it, for subsequent permission by the CERC.

It should be interesting to see if removal of the said clause, and the turmoil in the market right now in terms of prices being much higher than anticipated, lead to further issues or further delays for commissioning.