NEXTracker with 20 GW of its smart solar trackers delivered and under active fulfillment globally, has become the first company to reach the milestone. 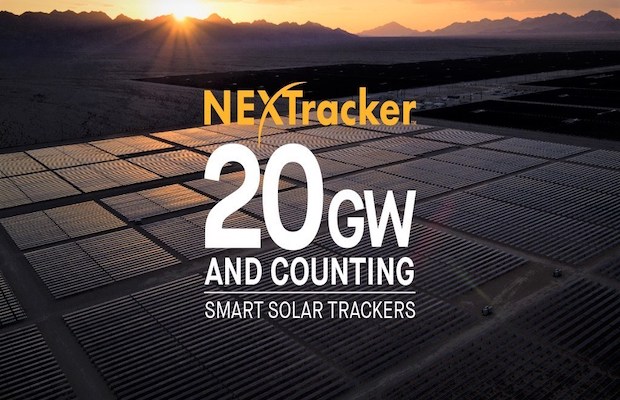 NEXTracker, a Flex company, has announced its latest industry milestone, with 20 gigawatts (GW) of its smart solar trackers delivered and under active fulfillment globally. NEXTracker was named the No.1 supplier of photovoltaic (PV)  tracker systems globally in 2018, a title it has held for four consecutive years, according to research and consultancy firms IHS Markit and Wood McKenzie Power and Renewables.

To serve expanding customer demand, the company has doubled its global manufacturing capacity over the past year to 300 megawatts per week.

According to IHS Markit, global shipments of single-axis solar trackers increased by over 40 percent in 2018 and surpassed 20 GW globally for the first time. This is compared to only 4 GW of global installations in 2013, of which 11 percent were tracker deployments in that year (with fixed tilt installations accounting for the remaining 89 percent).

Rajit Nanda, chief investment officer at ACWA Power International said, “Congratulation to NEXTracker for this achievement. With a significant addressable market for solar trackers in the Middle East & North Africa region, ACWA Power is pleased to have a trusted and reliable partner that collaborates on the front end of projects with value engineering and has shown to be a reliable partner in achieving the ambitious goals of localising the manufacturing of an important part of the solar PV value chain in the region.”