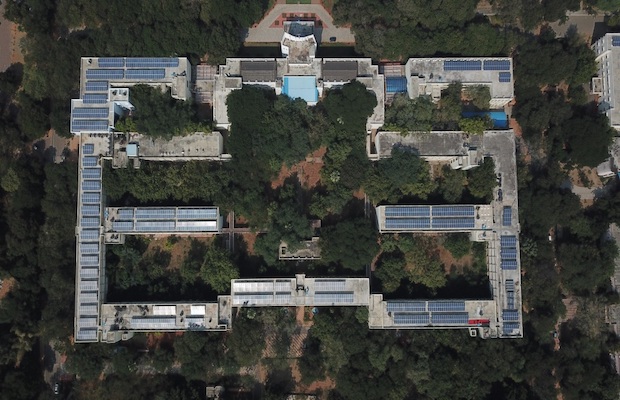 A new regulation that excludes rooftop solar systems over 10 kilowatts (kW) from net metering will stall the adoption of larger installations in India, undermining progress towards the government’s rooftop solar target of 40 gigawatts (GW) by 2022, according to a new research note.

According to the briefing note by IEEFA and JMK, a provision in the Ministry of Power’s new rules for electricity consumers which mandates net metering for rooftop solar projects up to 10 kW and gross metering for systems with loads above 10 kW will likely make rooftop solar commercially unviable for big residential and commercial and industrial (C&I) consumers.

“Currently, India only has around 6 GW of installed rooftop solar capacity, the majority of which has been developed by C&I consumers. So the very consumers who are driving rooftop installations in India are also the ones most likely to be deterred by the 10 kW limit on net metering,” said co-author Vibhuti Garg, Energy Economist, Lead India, at the Institute for Energy Economics and Financial Analysis (IEEFA).

“India already has a long way to go to meet its critically important 40 GW target, and if limiting net metering to 10kW makes the rooftop solar space unattractive for C&I consumers, it is unlikely that we will be able to achieve that target.”

According to the authors who analysed the net and gross metering tariffs payable across leading states. It was found that gross-metered consumers are compensated for the export of solar power to the grid at rates of Rs 2-4/kWh. However, current rooftop power purchase agreements (PPAs) signed by Tier 1 developers have tariffs in the range of Rs 3.5-4/kWh.

“Developers and corporate consumers would consider any tariff lower than the current PPA tariff unviable,” said Jyoti Gulia from JMK. “If consumers have to buy electricity from Discoms at a high tariff and at the same time the feed-in tariff they receive is low they will have no incentive to set up rooftop solar at their premises. 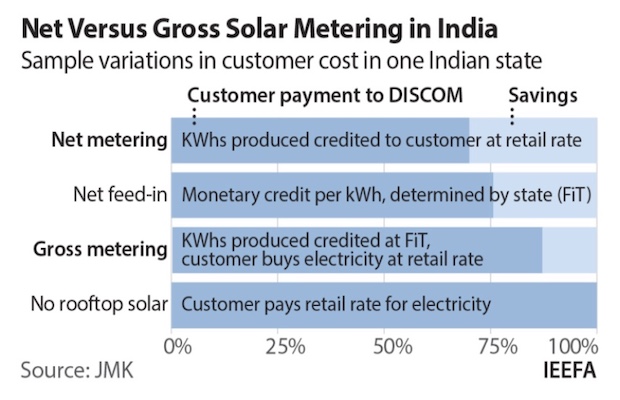 “Also, under gross metering, corporate consumers would not benefit commercially from using the power generated from their own system for self-consumption. Both C&I consumers and developers will find their payback periods will be much longer and the investment will become riskier, delaying the roll-out of this strategically important, cost-effective technology solution.”

Discoms, on the other hand, will notionally benefit from the shift to gross metering for installations with loads above 10 kW, paying less for the same amount of energy. Except those benefits will be dissipated because there will be no material new investment by C&I customers, per the authors.

The note points out that although it is up to states to implement the central government’s restriction on net metering, many are likely to do so to address the loss-making Discoms’ concerns over high-paying C&I consumers shifting to rooftop solar.  Several states have already started to implement the new regulation in different forms. The note details how West Bengal has issued amendments that allow net metering for consumers with sanctioned loads of up to 5 kW and gross metering for contract demand above 5 kW. Karnataka has also proposed a gross metering arrangement for rooftop solar projects over 10 kW capacity at a Rs 2.84/kWh tariff.

The authors have proposed a net feed-in mechanism as a “win-win” solution for all the stakeholders, explaining that it would not have a major impact on Discoms’ revenue and would still be beneficial for the consumer.

“We urge the Ministry of Power to consider the interests of all stakeholders – developers, consumers and Discoms – in resolving the challenges of the net metering restriction while also stimulating private investment to boost adoption of low cost, zero emissions distributed capacity,” she concluded.

Recently, Union micro, small and medium industries minister Nitin Gadkari had urged power minister RK Singh to reconsider a recent controversial decision to restrict net metering in solar rooftop projects. In a letter to Singh dated February 15, Gadkari noted that while more and more micro, small and medium enterprises (MSMEs) were installing solar rooftop projects, thereby contributing to the share of clean energy in the grid, the notification might well discourage them.

“It is feared that this share will shrink in the near future, affect power generation of the nation, as it is feared that the new amendments are going to affect the savings of the small units and individuals,” Gadkari said in a letter.