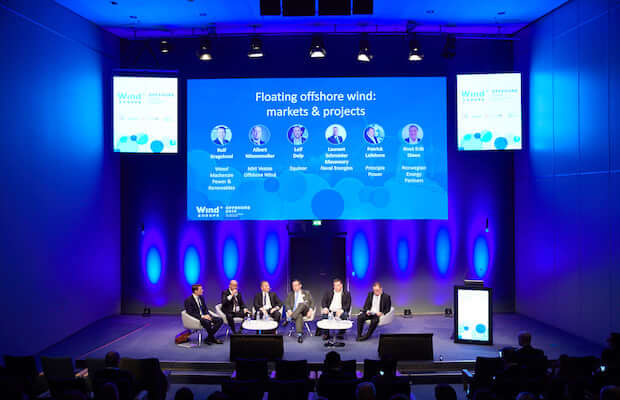 The expansion of offshore wind, as part of the global fight against climate change, will require both bottom-fixed and floating offshore turbines. Floating technology unlocks previously unimaginable horizons of wind power at sea – but there are still some political and technical hurdles to unleashing the full potential.

In Europe, Asia and the US, we see a large expansion of the floating sector and we look across the supply chain. Equinor’s Leif Delf said that “We need cables and mooring systems which need to be mobilised to build commercial projects.

R&I will be key to this – but so will clear visibility on project pipelines. This will require millions in investment. As of now, Naval Energies’ Laurent Schneider said, “France is the only country with floating in their NECP.” This is an example that needs to be followed: having clear policy-based plans for floating is the only way to fully secure investments in the deployment of floating technologies.

Wood Mackenzie’s Rolf Kragelund agreed that the clear pipeline of projects up to 2023, which will see up to 88 MW built, is not enough to create a clear path to the market. “Like in France, governments need to make specific tenders for floating.”

Albert Winnemuller of MHI Vestas added that we shouldn’t forget the support that ports will need for the industry to realise and move beyond demonstration projects. “We need to support mechanisms. Without these, floating will take more time to happen. More countries should follow the example of France, combine price and expectation in volumes and make this both clear and visible.”

Principle Power’s Patrick Lefebvre said that, by 2050, the offshore wind should be dominated by floating. However, a lot can happen between now and then.

Right now, getting experience is critical. Put simply, floating wind on paper is not the same as in real conditions. Scalability is key and at the right level. “We need a chance to learn more and we can only learn by doing”, Lefebvre said. “We are just at the beginning of the learning curve.”

Leif Delf said that Equinor is looking into floating foundations, as commercialisation is the big battle. There are currently about 60 technology concepts globally, all at different technology readiness levels. Schneider said that there are probably too many solutions available right now – perhaps a fraction of these will remain. Kragelund said it’s too early to say which technology will be the “winner” of tomorrow, but that we need commercialisation, and the existing technologies will soon face new challenges.

There was widespread agreement on the need to convince the different governments of the impacts and the regulations they have to put in place to develop these projects. There need to be technology-specific tenders specific for floating. This all needs to part of the EU’s New Green Deal.