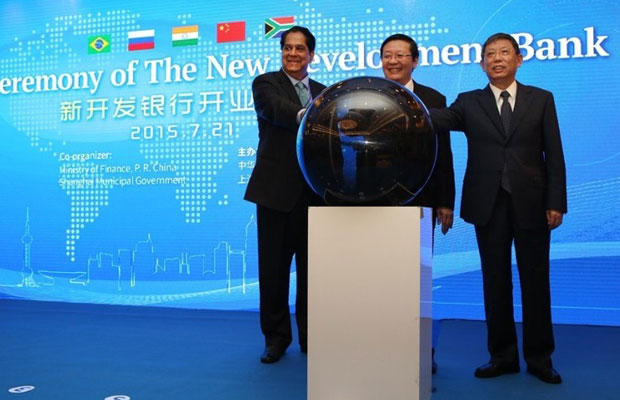 “We congratulate on the signing of the first Chinese loan agreement with NDB. This demonstrates the strong commitment of Chinese government to support NDB in delivering its mandate of promoting infrastructure and sustainable development in members of the bank,” said Mr. Shi Yaobin.

“As Shanghai embarks on a more balanced, coordinated, and sustainable development path, we look forward to working with the NDB and benefit from its financial, technological, and managerial expertise,” said Mr. Ying Yong, Executive Vice Mayor of Shanghai.

“We welcome the signing of our first loan agreement, which is a seminal event for the NDB. The Shanghai Lingang Distributed Solar Power Project is a good example of forward-looking and green investment. We hope that this project and other projects supported by the Bank will act as catalysts for development in our member states,” said Mr. K.V. Kamath.

The Project will be implemented by Shanghai Lingang Hongbo New Energy Development Co. Ltd. Under the framework of the Project, a solar photovoltaic power plant with total capacity of 100 MW will be built in Lingang Industrial Area, one of the six major functional development areas of Shanghai. The Project will be divided into a number of smaller sub-projects that will be sequentially implemented over a period of 3 years.

In July 2016, the NDB issued its debut bond in China. It was the first time that an international financial institution issued a green financial bond in the China onshore interbank bond market. The size of the issue was RMB 3 bln (USD 449 mln). The project will be financed by the proceeds of the issue.

Earlier this year, the Board of Directors (BoD) of the NDB approved seven investment projects in all member countries for a total of over USD 1.5 bln. All projects are in line with the Bank’s focus on environmentally friendly energy generation, sustainable development and infrastructure. The approved projects will support the creation of 1500 MW of renewable energy capacity and are estimated to result in the reduction of greenhouse gas emissions by over 4.1 mln tons per year.

The New Development Bank was created with an objective of financing infrastructure and sustainable development projects in BRICS and other emerging economies and developing countries. The Bank will complement the efforts of other financial institutions and establish a network of global, regional and local partnerships with multilateral and national development banks as well as other institutions and market players. The NDB intends to be fast, flexible and efficient, without sacrificing quality. The Bank will use various financial instruments to efficiently meet the demands of member states and clients.