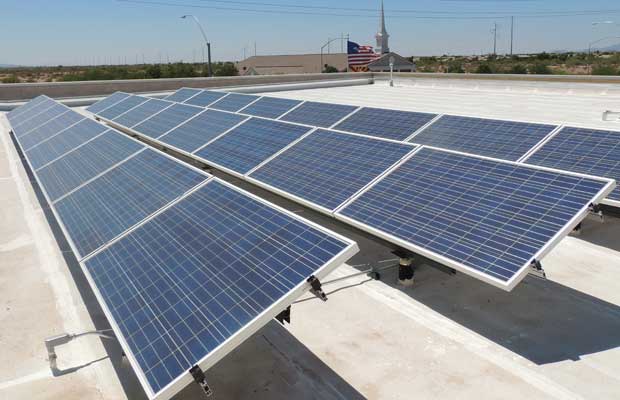 Mumbai’s pioneering institution Bombay College of Pharmacy in Kalina generates its 70 percent of electricity from 453 solar panels. The 140 kilowatt solar power system (kWp) allows the college to save around Rs 1.6 lakh every month of electricity bills.

The rooftop solar power system generates about 15399 units of electricity per month and provides power from air-conditioners to fans to lifts across 13 laboratories. Besides that, seven classrooms, the canteen and the college administration area also runs on the solar power system.

Unlike power plants that emit many harmful pollutants in the air, solar energy is clean, pure energy from the sun.  One of the advantages of solar energy is that it can be also used in remote areas where electricity from the station is not possible.

“We went for such a large-scale setup because this energy source is both eco-friendly and cost-effective, and allows us to give something back to the environment,” said Nitin Navnitray Maniar, Chairman, Governing Body, Bombay Pharmacy College and Special Executive Officer for the state government.

The entire solar project of 453 solar panels installed across a 13500 sq.ft terrace area was completed in two phases. In May 2015, a 50kWp setup was installed in the first phase at a cost of Rs 39.5 lakh and a 90kWp unit was installed for Rs49.5 lakh in February this year.

“We expect to recover the entire Rs 89 lakh by 2021. We have already received Rs 14.59 lakh in the form of subsidy (30%) from the state government. We estimate annual savings of Rs 20 lakh from this project,” Maniar added.

Since the installation of solar project in the college, the monthly electricity bill fell to Rs 1.65 lakh from Rs 3.25 lakh before installation. A net-metering system is also used in the institute, which allows the left-over power generated through solar panels to be sent back to the grid and any shortage is imported from the grid.