Narendra Modi Flags Off First Ever Diesel to Electric Locomotive 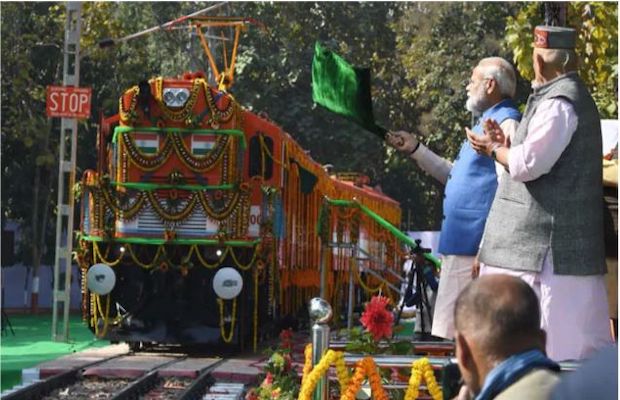 Prime minister Narendra Modi has flagged off the world’s first ever diesel to electric converted locomotive at the Diesel Locomotive Works in Varanasi.

The Prime Minister unveiled the first of its kind converted electric locomotive during his visit to Varanasi, Uttar Pradesh on February 19, 2019, to lay the foundation stone of developmental projects and unveil several other projects there.

Diesel Locomotive Works has converted two WDG3A Diesel Locos into a Twin Electric WAGC3 loco of 10,000 HP. A complete ‘Make in India’ initiative, the conversion is an Indian R&D innovation for the entire world. The converted locos will result in less Green House Gas emissions and better efficient locomotives for the Indian Railways.

The feat was achieved in record time with the help of engineers from Research Designs and Standards Organisation (RDSO), Chittaranjan Locomotive Works(CLW), and Bharat Heavy Electricals Ltd. (BHEL).

PM visited Varanasi to gift several projects worth Rs 3,382 crores to his Parliamentary constituency  ahead of Lok Sabha elections, which include,

Inauguration of the newly constructed Madan Mohan Malviya Cancer Centre of Banaras Hindu University, which will bring comprehensive yet affordable cancer care to patients in UP, Jharkhand, Bihar, Uttarakhand and, even, neighbouring countries like Nepal. And, the inauguration of the Homi Bhabha Cancer Hospital Lehartara.

The Power Ministry claimed in a statement that, this Rs 4,976 crore project will improve the power system in Western UP along with Bundelkhand.

Prior to that the PM dedicated the 220 kV Srinagar- Alusteng – Drass- Kargil – Leh transmission system to the nation. The transmission line will guarantee quality power supply to Ladakh round the year.

Tags: Diesel to Electric Locomotive, electric vehicle, India, Narendra Modi
"Want to be featured here or have news to share? Write to info[at]saurenergy.com