PM Modi further added that the current actions are inadequate and we need a behavioral shift in combating climate change. 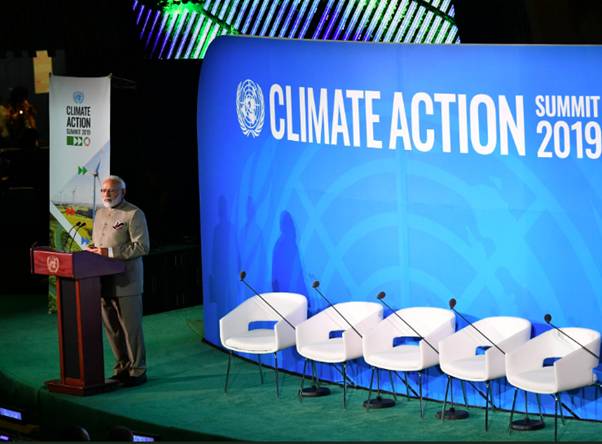 Prime Minister Narendra Modi made a big announcement at the UN Climate Summit about India doubling the share of non-fossil fuel capacity.

Prime Minister Narendra Modi was warmly welcomed by US President Donald Trump just ahead of the UN Climate Action Summit which has made headlines after the UN chief blocked many, including the US, to speak at the Summit in New York.

PM Modi further added that the current actions are inadequate and we need a behavioral shift in combating climate change. India and the US, despite their visible bonhomie, differ substantially on climate change. President Trump withdrew from the 2015 Paris Climate treaty in 2017 and blamed India and China for the rise in global emissions. Despite this sticking point and with re-elections around the corner, Trump made an unexpected and brief appearance at the UN summit to attend Modi’s speech, throwing international media into a tizzy.

A wave of bankruptcies has hit America’s largest coal mining regions like Wyoming and Montana as coal has lost its market share as fuel for electricity generation to natural gas and renewable energy sources like wind and solar. From a 40 percent share 5 years ago, coal has contracted to less than a quarter in recent times.

US power companies have announced retirements of more than 546 coal-fired power units amounting to about 102,000 megawatts of capacity this decade, according to the Energy Information Administration.

India, on the other hand, introduced a 100 percent FDI in its coal sector to rev up the slump but a series of strikes in Coal India and Singareni Collieries point to deeper woes within the sector. Fitch Solutions Macro Research says India is on track to overtake China as the largest importer of coking coal by 2025 and has plans to add 91,540 MW of coal power.

So PM Modi’s target of doubling the non-fossil fuel power to 450 GW from a previous 175 GW needs to be looked at with a pinch of salt. Even for the 175 GW target, many agencies have expressed their reluctance.

If PM Modi is serious to see through the 450 GW challenge, he will need to overhaul India’s industrial policy and include RE in each of the core industries that propel the country’s engine. The 8 core industries – power, steel, refinery products, crude oil, coal, cement, natural gas, and fertilizers – do not have set targets, plan or a coherent strategy to shift towards cleaner future or substitutes.