The Ministry of New and Renewable Energy (MNRE) is in the process of marking the final seal on a national lab policy to set norms for standardization, testing and certification of renewable energy related products in India, and also define the infrastructure required for the testing centres. Expected to be completed within a month’s time, the policy document is in the final stage of being drafted. 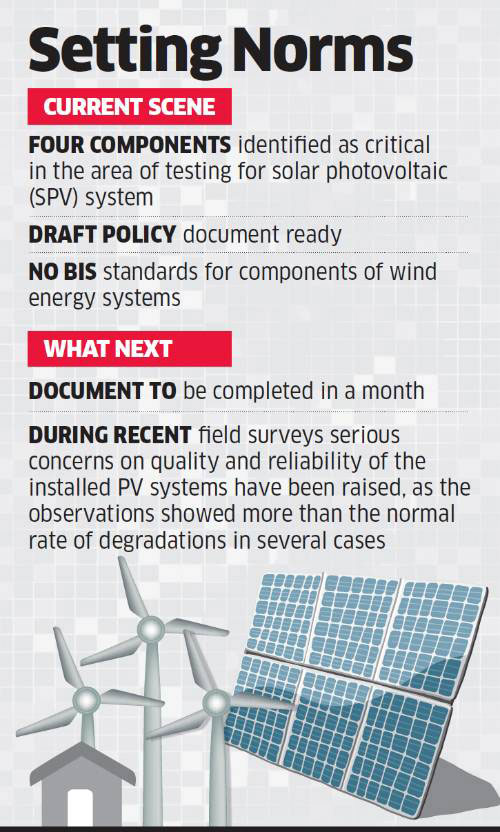 As of now there were no existing standards for products such as solar batteries, solar pumps, solar thermal systems and solar lanterns, the draft mentions that these products need to be quickly put in place. The draft also states the highly technical standards that each of these solar products should adhere to.

Currently, there are only three laboratories for testing such solar equipment in the country- two private laboratories in Bengaluru, owned by Germany-based TUV Rhineland and US-based UL, and one in Gurgaon- NISE.

Sudhir Zautshi, Head (government and industry affairs) at UL India and Ganga Charan Sharma, VP at TUV are also amongst the members of the committee that prepared the draft policy. Other members include Srinivasa Murthy of IISc, Bengaluru, Vikram Kumar of IIT Delhi, and S Gomathinayagam, Director at National Institute of Wind Energy.

Apart from the non-existence of standards for a number of solar products, there were no standard directions even from MNRE regarding testing of solar thermal systems in India. Standards for biogas plants were last drafted out by the Bureau of Indian Standards (BIS) in 1990. These and other few lacunae were brought to light up by a committee member and are likely to be addressed.

The national lab policy document for renewable energy has identified four components as critical in the area of testing for solar photovoltaic (SPV) system: that includes modules, batteries, inverters and water pumping systems.

The draft states that “During recent field surveys serious concerns on quality and reliability of the installed PV systems have been raised, as the observations showed more than the normal rate of degradations in several cases. It is felt that an immediate policy intervention is needed for quality improvement of all the components and SPV systems and power plant.”

Setting standards or solar products is in line with the government’s thrust towards manufacturing more modules, inverters, solar cells and components indigenously.