Minara Masjid, the first shrine in Mumbai that tapped solar power cuts power bill by half 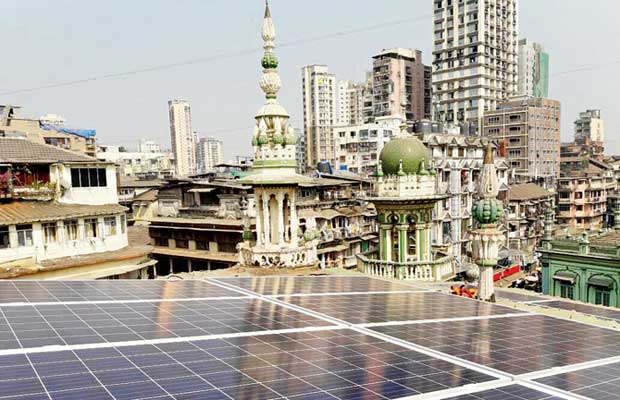 After installing 15KW solar panel on its roof in February this year, Minara Masjid has managed to save lakhs of rupees on its electricity bill in last four months.

The Minara Masjid located at Mohammad Ali Road is gussied up in green light in the holy month of Ramzan. It may look like arduous task for the mosque where thousands throngs up for prayers to manage electricity expenses; however the case is completely opposite, thanks to solar energy.

HT reports that after installing 15KW solar panel on its roof in February this year, the mosque has managed to save lakhs of rupees on its electricity bill in last four months. Abdul Wahab, trustee, Minara Masjid trust speaking to the publication said “Our monthly electricity bill has cut down to Rs25,000 as opposed to Rs50,000 that we had to pay before the solar power installation. We have already saved a lakh in four months by going green.” He added “ Lights, fans and air conditioners at all common areas within the mosque are powered by solar power.”

While a number of temples and churches has already adopted solar in the city, Minara Masjid is the first mosque to go green.

“Apart from the monetary savings, the idea is to tell devotees about the importance of reduction in carbon emissions from the environment,” said Wahab to HT. “We have been approached by almost 10 different mosques and churches over the past four months to understand how we installed the solar setup. We hope that the efforts are replicated and moving to solar becomes a mass movement, at least for all religious institutions in the city.”