Microsun Announces Completion of Solar Plant at 18,000 Feet For ITBP

Microsun Solar tech Private Limited has announced the completion of some key solar projects it has made for the Indo Tibetan Border Police, (ITBP), a key border force for the Indo-China border. The Indian army thus continues to build on its plans to use solar power more actively for its energy needs.

With these projects, soldiers from  Leh Ladakh to Arunachal Pradesh will get high-end outpost facilities with MicroSun Solar Panels on the Roofs, claims the firm. 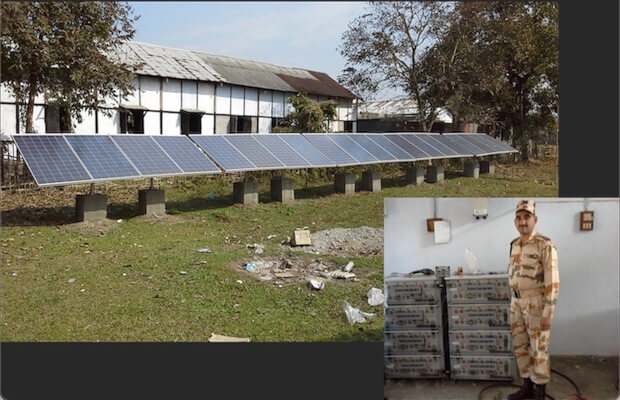 Leh Ladakh and Arunachal Pradesh are the remote mountainous area of Northern and Eastern India located high up in the Himalayan Range. The areas, known for its pristine beauty and challenging terrain, is marked by far-flung, sparsely populated villages—a majority of which have inadequate or no energy supply as the terrain makes drawing grid lines a daunting task. Military presence has been heavier than normal this year, due mainly to the ongoing border issues with China, which shares the border all along the region with India here.
The eco-friendly Border Outpost (BoP) was constructed by Central Government at a forward location near the India-China border at a height of 18,000 feet, which comprises central heating, roofs covered with solar panels.  Trekking and flying through Army Helicopters to as high as 18,000 feet to transport the solar energy equipment and set it up was a challenge. The firm claims that it has been 6 years since it had Installed the first of the systems.
The various arms of the Indian Army and other security forces like the BSF have in recent years, moved to make their bases more eco-friendly, with solar power. Not only has it helped cut down on diesel consumption, but a combination of solar and battery storage has also ensured a power supply in areas that are invariably difficult to reach with the national grid, or from nearby power sources.
Tags: highest solar plant, India, Indian Army, ITBP, Microsun ITBP Solar, MicroSun Solar
"Want to be featured here or have news to share? Write to info[at]saurenergy.com