Microsoft has announced that it has found a cleaner alternative to the diesel-powered backup generators for its data centres: hydrogen fuel cells. The software giant wants to become a zero-emission entity by 2030. 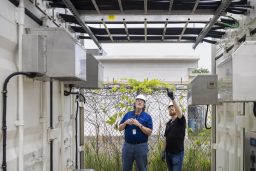 Microsoft has revealed that it has executed a hydrogen fuel cell trial successfully at its server farm campus in Latham, New York. Director Sean James called it a ‘moon-landing moment’ for the datacentre industry.

Microsoft had installed a proton exchange membrane (PEM) fuel cell technology at the site that produces electricity when hydrogen reacts with oxygen creating no carbon emissions. “The PEM fuel cell test in Latham demonstrated the viability of this technology at three megawatts, the first time at the scale of a backup generator at a datacenter,” the company’s blog post read.

Once green hydrogen is available and economically viable, this type of stationary backup power could be implemented across industries – from datacentres to commercial buildings and hospitals, stated Mircrosoft. The experiment with PEM cell began by Microsoft in 2018 but couldn’t materialize on cost grounds.

Now the focus is on rolling out an optimised commercial version of high-power stationary fuel cell systems that have a smaller footprint and a more streamlined and polished aesthetic. The company wants to install one hydrogen fuel cell system at a research datacentre where Microsoft engineers could understand technology and then able to deploy it elsewhere.

Google Has Invested $3.5 B In RE Projects, Will Invest More Worldwide
Also Read

Microsoft is yet to announce a date of the first deployment. It said, “We’ve got a commitment to be completely diesel-free and that supply chain has got to be robust – we’ve got to talk about scale across the entire hydrogen industry.”