Mechanochemistry is a rapidly developing field of science dealing with chemical reactions occurring directly between solid-phase compounds upon activation by mechanical force. 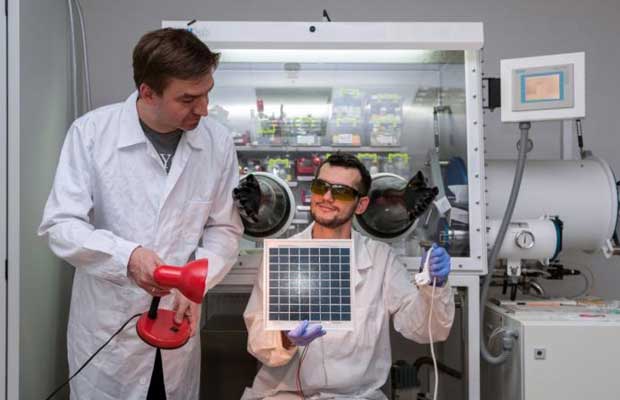 For several years, tension has been rising in line with the approaching commercialization of perovskite photovoltaic cells. Now, there has been another small earthquake: it turns out that devices based on these materials can convert solar energy into electricity even more efficiently! There is one condition: instead of producing perovskites by traditional solution methods, they should be produced by … grinding.

The interaction of researchers who have fundamental knowledge of chemistry with experienced technologists can produce unexpected results. A Swiss-Polish team from the Institute of Physical Chemistry of the Polish Academy of Sciences (IPC PAS) in Warsaw and the Ecole Polytechnique Federale de Lausanne (EPFL) in Lausanne (Switzerland) co-operating within the GOTSolar project, implemented under the FET Open (Future and Emerging Technologies) programme in Horizon 2020, has demonstrated a perovskite cell with a significantly smaller number of structural defects. The unexpected improvement of the photovoltaic performance was observed when perovskites produced by mechanochemistry were used for the construction of a typical photovoltaic cell.

Mechanochemistry is a rapidly developing field of science dealing with chemical reactions occurring directly between solid-phase compounds upon activation by mechanical force. In laboratories, such processes are carried out in automatic ball mills. However, some mechanochemical reactions could be successfully performed at home, by manual grinding in ordinary mortars.

Perovskites are a large group of materials with the general chemical formula ABX3, characterized by a cubic crystalline structure. Atoms of A are located at the centre of the cube, in the middle of each wall there is an X atom, and the corners are occupied by the atoms of element B. The name of this group of materials is derived from a naturally occurring mineral, calcium titanate CaTiO3, named perovskite in honour of the Russian geologist Leo Perovski.

The group of Prof. Janusz Lewinski (IPC PAS, Warsaw University of Technology) was the first to demonstrate that polycrystalline halide perovskites, e.g., the afore-mentioned (CH3NH3)PbI3 can be produced in mechanochemical reactions. Recently, the group have also presented the mechanochemical production of mixed perovskites, i.e., those in which several different types of ions alternate in position A. This is an important achievement, because, by carefully altering the chemical composition of the perovskite materials, they can be adapted to specific applications in photovoltaics, catalysis and other fields of science and technology.

“In practice, the mechanochemical production of our perovskites is as follows. Two powders, e.g. white methylammonium iodide CH3NH3I and yellow lead iodide PbI2, are placed in a mill equipped with a few steel balls. Then, we grind them for several dozen minutes and… we pour out a homogeneous black powder of the perovskite (CH3NH3)PbI3, which can be directly used for the construction of photovoltaic cells. You do not need to use high temperature, organic solvents, or worry about waste. The whole process is really fast and efficient. It is green chemistry,” says Marcin Saski, a PhD student at IPC PAS.

Professor Lewinski’s team is a leader in conducting academic research on the synthesis of perovskites in Poland. The materials produced here are assembled and tested at EPFL in collaboration with a world-class Swiss chemist, Prof. Michael Graetzel. Professor Graetzel specializes in nano- and mesomaterials for optoelectronics. One of his greatest achievements was the development of a new type of solar cell in which the conversion of solar energy to electricity takes place using a suitable dye, in 1991. Today, these cells are known as Dye-Sensitized Solar Cells (DSSCs), or simply Graetzel cells.

The laboratory photovoltaic cells, working on perovskite materials obtained by mechanochemistry, have just been constructed by Dr. Daniel Prochowicz (EPFL, IPC PAS). Interestingly enough, a perovskite layer of just ~300 nanometers was enough for its efficient action. In the future, such thin coverage will reduce the unit cost of cell production.

“An important property characterizing the quality of a photovoltaic cell is the amount of electrical charge accumulating at the boundary of individual cell layers. If there is too much, the cell undergoes degradation more rapidly. Perovskites obtained by mechanochemistry formed a very homogeneous layer, which reduced the number of defects in the structure impairing the work of the cell and reduced the amount of charge deposited on the surface,” says Dr. Prochowicz, who is conducting his research under a Maria Sklodowska-Curie Individual Fellowship in Prof. Graetzel’s group.

Why are the electrical properties of perovskite cells obtained by grinding better? The answer is not evident yet. It seems that the solvent used in production of perovskites plays a negative role. It can be incorporated into the structure of the material, and upon deposition of the perovskite on the substrate its residues may cause the formation of defects in the crystalline structure.

Microscopic and electrical studies have shown that better quality of mechanochemically-synthesized perovskites (obtained without solvents) comes along with reducing the number of traps for charge carriers, formed at the junction of the material with the substrate.

The research was carried out within two projects of the Horizon 2020 programme of the European Union. GOTSolar is a part of FET Open action, one of the most prestigious grants for international consortia of academic institutions and companies for the development of cutting-edge technologies on the early stage.

GOTSolar is aimed at creating a new generation of efficient and stable perovskite solar cells. Additional part of this research was a part of a Maria Sklodowska-Curie Individual Fellowship (MSCA IF), which a prestigious scholarship for young researchers for the postdoctoral research.