Masdar and Cepsa have announced an agreement to establish a JV company to develop renewable energy projects in Spain and Portugal. 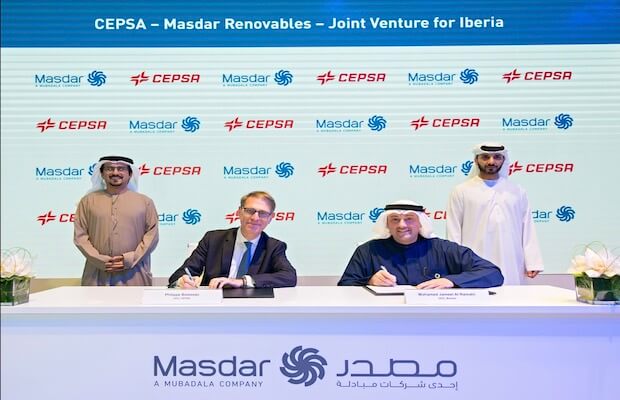 Masdar, one of the world’s leading renewable energy companies and a subsidiary of Mubadala Investment Company, and Cepsa, a global energy and chemical company owned by Mubadala and the Carlyle Group, has announced an agreement to establish a joint venture (JV) company to develop renewable energy projects in Spain and Portugal.

The 50:50 venture was announced at Abu Dhabi Sustainability Week 2020. The new company, Cepsa Masdar Renovables, will focus on developing wind and solar photovoltaic (PV) projects in the Iberian Peninsula, with an initial target of 500-600 MW.

“Masdar is proud to use its strong track record in renewables to help Spain and Portugal increase the share of clean energy in its energy mix. The Iberian Peninsula is an attractive location for renewable energy investors and we look forward to expanding our renewable energy portfolio further into the region while strengthening our partnership with Cepsa,” said Mohamed Jameel Al Ramahi, chief executive officer, Masdar.

Masdar has operated in Spain since 2008 through Torresol Energy and supplies power to over 107,000 homes, with facilities in the province of Cádiz, and in Seville, where it runs Gemasolar, the first commercial-scale solar thermal plant in the world capable of providing power 24 hours a day. Cepsa operates a wind farm in Jerez de la Frontera (Cádiz, Spain) with an installed capacity of 28.8MW and an estimated production of 72 GWh per annum. Its production is enough to power more than 20,000 homes annually, cutting CO2 emissions by 32,000 tons.

“As a global energy company, we are building a diversified business portfolio. Renewable energy is one of the fundamental pillars of the energy transition and one of the fields in which we want to expand our presence. The alliance with Masdar represents an important lever for our growth in this sector, focused on Spain and Portugal,” said Philippe Boisseau, chief executive officer, Cepsa.