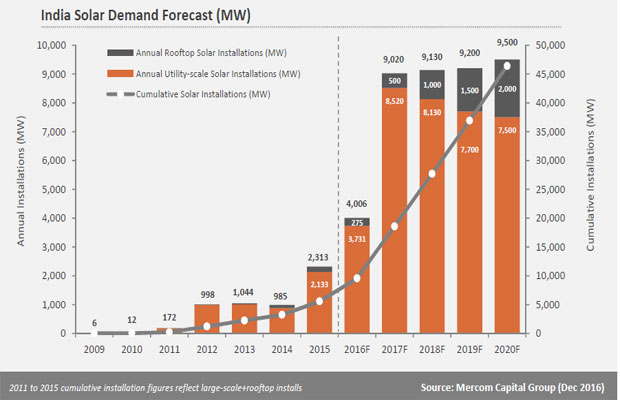 Solar installation of over 9 GW in 2017 would put the Indian solar sector in the big leagues along with China, the United States, and Japan

Global clean energy communications and consulting firm, Mercom Capital forecasts solar capacity addition in India of over 9 GW during the current calendar year 2017.  2016 saw solar installations at about 4 GW as compared to 2.3 GW installed in 2015.

“We are forecasting installations to reach over 9 GW in 2017 which would put the Indian solar sector in the big leagues along with China, the United States, and Japan. However, there are significant headwinds in terms of transmission and evacuation issues that could threaten the pace of growth,” said Raj Prabhu, CEO and co-founder of Mercom Capital Group.

The share of solar generation continues to grow with 16.7 percent of new power generating capacity added in 2016 (as of November 2016). Solar accounted for almost one percent of electricity generated from April-October (FY2016-2017), 50 percent more than all of FY2015-2016.

Indian government agencies have announced solar tenders of ~3,781 MW during Sep-Dec 2016 and auctioned about 1,311 MW. Auction activity has slowed over the last three months notes the research firm.

Mercom Capital in its report stated that the project development landscape has changed significantly over the last quarter largely due to Chinese module price declines. The average selling prices (ASPs) of Chinese modules in India have declined approximately 10 percent since August and by about 30 percent over the last 12 months. This decline in prices has provided a much-needed boost to developers that won projects at low bids and were struggling to make project economics work.

The major concerns for the industry are currently around transmission, evacuation, curtailment, timely payments and the outcome of the goods and services tax (GST).

“Solar park development is experiencing some setbacks due to incomplete infrastructure,” said Prabhu. He added “In some cases, developers are incurring expenses to clean the land, build roads, and are waiting for power to be evacuated after commissioning. All of this is having a negative effect on project costs and profitability.”

Key Findings of the report