The scheme is set to make electricity affordable for “The poorest of the poor” and promised 24×7 power supply by March 2019. 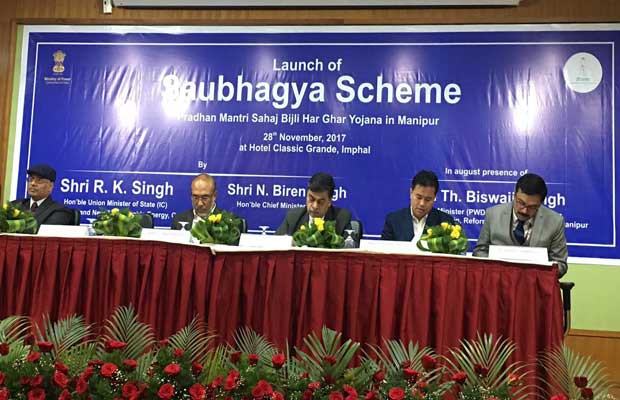 State of Manipur is now included in the list of states to bestowed with the Saubhagya scheme, which aims to provide electricity to India’s each and every household. Minister for Power and New & Renewable Energy, R.K. Singh launched the same, meanwhile appreciated Manipur government’s performance in the energy domain terming it as a reforming state. As per the target of the scheme, a total of 175,000 households, 162,000 rural homes and 13,000 urban homes will be benefitted.

The scheme is set to make electricity affordable for “The poorest of the poor” and promised 24×7 power supply by March 2019 and the Saubhagya scheme to complete by December 2018 as per the other government releases.

The procurement of transformers and meters with extended financial aid will eventually help in strengthening and improving Manipur power sectors’ infrastructure.

Singh credited PM Modi’s vision of providing country’s every household with electricity. With installation of solar, energy storage batteries and LED lighting in energy willing un-electrified household the Saubhagya is an INR 163 billion (US$2.5 Billion) project. The project will be funded by government and Discoms, state governments and/or borrowings in the ratio of 75 percent and 25 percent respectively.

As per the government estimation as many as 46 million households doesn’t have  access to electricity, out of which 30 million falling below the poverty line will be targeted on priority. The beneficiaries will be selective to receive the free electricity connections and eligibility will be determined as per the Socio and Economic Caste Census (SECC), 2011 data. The scheme is targeted to mitigate the use of kerosene lamps and improving quality of services and life, enhancing the status in terms economic, social and educational simultaneously.

Its overall aim is to reduce the use of Kerosene lamps whilst improving quality of life and services as well as to enhance status.